Armed Police is the backbone of J&K Police: DGP 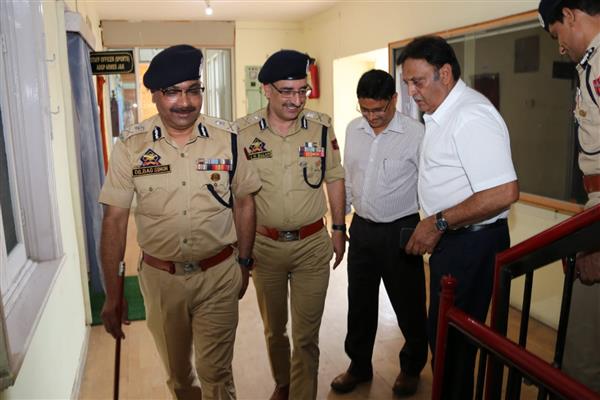 Srinagar: Director General of Police (DGP), Dilbagh Singh has said that the armed police of Jammu Kashmir poilice is the backbone of the department.

On his arrival the DGP was given a ceremonial guard of honour. Thereafter DGP chaired a meeting which was attended by senior police officers and reviewed the functioning of the Armed Police wing. The meeting which was attended by ADGP CID, J&K Dr. B. Srinivas, ADGP (Armed) S.J.M. Gillani, ADGP Law & Order/Security Munir Ahmad Khan, IGP Armed Kashmir Vijay Kumar, IGP (Pers.) PHQ J.P. Singh and IGP Kashmir S.P. Pani.

The DGP J&K in his address said that Armed Police is the backbone of the J&K Police with having highest number of personnel on its roll who are doing their duties at multiple places and are entrusted with multiple tasks.

Dilbagh Singh complimented Armed Police for handling law & order, security and other multifarious jobs in the State and currently having huge deployment in Amarnath Yatra including the Mountain Rescue Teams (MRTs), and also praised the role of Armed Police in counter insurgency grid. The DGP while complementing the role of MRTs in rescuing hundreds of the yatries said that Governor Satya Pal Malik and Advisors of the Governor have hailed the role of these MRTs. Their role has been highlighted by the national media and Yatris, he added

While congratulating the Armed Police personnel SgCt. Nazir Ahmad and SgCt. Falil Singh for scaling the Mount Everest and also other personnel who have brought laurels to the Police by winning medals, the DGP impressed that more and more attention must be given to the Central Sports teams.