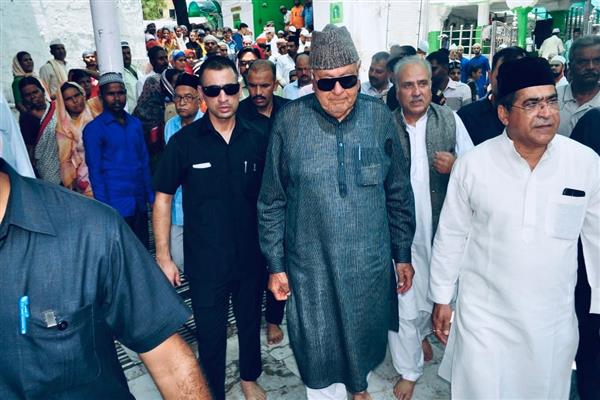 Srinagar: Jammu and Kashmir National Conference president and Member of Parliament Dr Farooq Abdullah on Tuesday congratulated Prime Minister Narendra Modi for seeking intervention of United States President Donald Trump in solving the protracted issue of Jammu and Kashmir and asked world powers to make Kashmir a zone of peace and not the zone of conflict.

Party president while applauding the efforts of Prime Minister Modi for showing courage in resolving the long pending issue of J&K said,

“It is indeed a welcome step to see the prime Minister make sincere efforts to solve the issue that has been lingering around for more than seven decades,” adding, “Any mediation in conflict resolution is not a new approach; it is one of the traditional means of diplomacy that affords the two conflict ridden countries reach to a suitable solution.”

Welcoming any move which is aimed to bring long-lasting peace and stability to the sub-continent, Dr Farooq said, “It is high time for India and Pakistan to shun hostilities because at the end its people of our state who face the direct brunt of such hostilities. It’s our people who come in the line of fire whenever there is friction between India and Pakistan and therefore continue to remain mired within the strained Indo-Pak relationship. The issue of Kashmir in fact led to multiples wars between the two countries and escalated tensions from time to time. The people of the state want an end to all rounds of violence and fresh round of political maneuvers that would satisfy the aspirations of the people of the state besides affording a win-win situation for both India and Pakistan,” adding, “So many conflicts would be resolved if leaders consider the humane aspects of it, it is high time for both the neighboring countries to solve the issue that has devoured many precious lives. The development prospects of the sub-continent too have remained hostage to the animosity between the two neighbors.”

Party president while rebuffing the forces within the country for bogging Modi down said, “It is not for the first time that any outside intervention has been sought on this issue. The famous Tashkent Declaration is a stark example of that was signed fifty years ago. The document is considered as one of the first examples of diplomatic mediation by Soviet Union. The mediation efforts were successful that obliged both the countries to cease hostilities, withdraw all military forces to positions they held prior to the start of the armed escalation, and resume diplomatic ties.”

“It is highly regrettable to see Prime Minister being bogged down by political outfits from within the country. We denounce the forces as are disapproving the efforts of the Prime Minister. We congratulate Prime Minister Modi for showing courage. Our party has been a votary of dialogue; we strongly believe that only dialogue affords the way forward. The issue should not be subjected to undue politicking, it is high time for all politicians across the political spectrum of the country to appreciate the courage of the Prime Minister,” he said.

Party’s members of Parliament Muhammad Akbar Lone, Hasnain Masoodi have also welcomed the courageous move of Prime Minister Modi saying the need of the hour called for strengthening his efforts towards solving the protracted issue of J&K.