A prominent Kashmiri in exile, Yousuf Buchh breathed his last at New York

Will be laid to rest in Muzaffarabad close to the graves of KH Khurshid, Moulvi Yousuf Shah 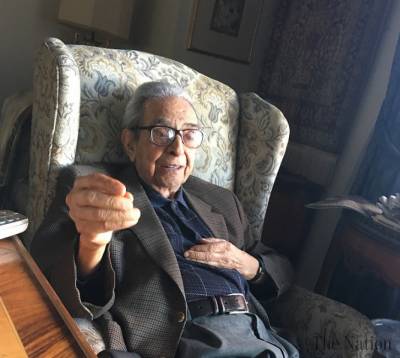 Muzzafarabad: Following the death of Mirwaiz Maulana Yusuf Shah and Khurshid Hassan Khurshid, another Kashmiri in exile, Ambassador Yusuf Buch passed away at New York in the United States of America on May 24.

Buchh was born in Kalashpora located in down town area of Srinagar in the politically surcharged era of 1930s.

After completing his education, he cracked Kashmir Civil Services exam and was appointed as a Tehsildar in Revenue Department of Jammu and Kashmir in 1950.

During the Pakistan Movement in 1940’s, he was politically close to Mirwaiz dynasty in Srinagar. As such, he crossed the then ceasefire line from Uri to enter into Pakistan Administered Kashmir (PaK) to unite with his close ideological ally Mirwaiz Yousuf shah- who was forcibly exiled by Sheikh Mohammad Abdullah from Kashmir.

In PaK, Buchh stayed with Mirwaz Muhammad Yousuf Shah in Muzaffarabad who appointed him as his special advisor in the then Presidency of PaK.

In 1953, Buchh won an essay contest sponsored by the United Nations (UN). Later he shifted to USA where he worked as a correspondent at the world body.

While working at the UN, Kashmir issue remained his top priority.  In New York, he established a “Free Kashmir Centre” from 1957 to 1972 aimed to highlight “Kashmiris political struggle for the right of self-determination”.

The center was shut after India and Pakistan signed the Shimla agreement following the separation of Bangladesh from Pakistan.

Buchh was a multi-talented scholar, who also worked as the senior advisor to the Secretary General of UN for more than 18 years.

In Pakistan he was considered as one of most intelligent man. He was close friend of former Prime Minister of Pakistan Zulfikar Ali Bhutto who later appointed him as ambassador to Switzerland. The deceased also worked as the speech writer for Bhutto with special focus on issues pertaining to Jammu and Kashmir dispute.

He got married during the same time. Unfortunately it could not last long and he got divorced in 1979.

Ambassador Buchh was the critic of General Musharraf’s four-point formula, often asserting that the final and durable settlement of Kashmir dispute lies in the implementation of UN resolutions.

“Whenever ambassador Buchh would come to Pakistan and Muzaffarabad he would first ask about the welfare of Kashmiri refugees settled in AJK. He visited Muzaffarabad for the last time in 1998,” Shaukat Jan Buch, his cousin and former retired AJK government secretary, said.

Shaukat further said that “Kashmir’s freedom was the dream of Buchh” for which he devoted his entire life in USA.

Hurriyat (M) Chairman, Mirwaiz Umar Farooq paid glowing tributes to ambassador Buchh saying he was the legend and a living encyclopedia on Kashmir.

Mirwaiz said he dedicated his life for the Kashmir cause and whole of Kashmiri nation is praying for the departed soul.

PaK President Sardar Masood Khan said that Ambassador Buchh was the epitome of knowledge and the best tribute to the deceased would be to carry his mission forward till the final settlement of Jammu and Kashmir as per the wishes and aspirations of the people of Jammu and Kashmir.

“He highlighted the Kashmir cause at international level and for his matchless services whole Kashmiri nation is proud of him,” Khan added.

Justice (retired) Geelani said that Ambassador Buchh was the strong voice of Kashmiri people at international level and “we are proud of his services he rendered for the noble cause of Kashmir”.

Ambassador Buchh would be laid to rest as per his wish in Muzaffarabad.

The body of the deceased would be transported from New York to Islamabad and will later be buried close to K H Khurshid and Mirwaiz Yusuf Shah in the capital city of PaK- his last abode.

One Response to "A prominent Kashmiri in exile, Yousuf Buchh breathed his last at New York"