In a televised ceremony, Rivlin told Netanyahu that in consultations with all parties elected to the incoming 120-seat parliament, “65 MPs recommended you.” Rivlin had sounded out delegations from political parties on Monday and Tuesday.

Only 45 members supported his main rivals from the Blue and White alliance led by ex-military chief Benny Gantz, with the 10 members of the Arab parties recommending nobody.

“This is the fifth time I am taking on the task of putting together the government of Israel,” Netanyahu said at Wednesday’s ceremony.

“There is no greater privilege in democratic life.” British Prime Minister Theresa May welcomed Netanyahu’s fifth term on her official Twitter account.

“Congratulations to PM Netanyahu on being asked to form a new Israeli government,” she wrote. “The UK’s relationship with Israel is of great importance and I look forward to deepening this further.” In his remarks Rivlin referred to the election campaign, which candidates and commentators agreed had been exceptionally brutal.

“Things were said that should not have been said, from all sides,” he said.

Netanyahu then pledged to serve all Israelis, opponents as well as supporters. 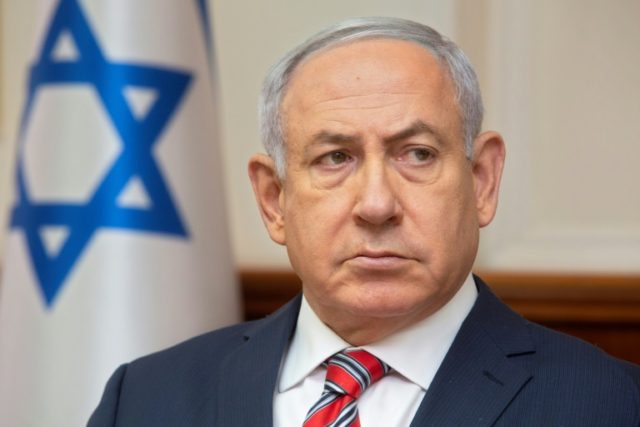 “I am well aware of the size of the responsibility placed upon my shoulders and shall act as the envoy of all of the people, those who voted for me and those who did not,” he said.

He now has 28 days to form a government, with a possible extension of a further two weeks.

The 69-year-old’s first task will be to reconcile divergent demands from his likely coalition partners.

Netanyahu’s outgoing government was seen as the most right-wing in Israel’s history, and the next is expected to be similar if not further to the right.

Lieberman has said he would condition his joining the coalition on the adoption of a law aimed at drafting ultra-Orthodox Jews into the military like their secular counterparts.

Ultra-Orthodox Jews studying at religious seminaries are currently exempt from mandatory military service, a situation many Israelis see as unfair.

But attempts to change the law have met with strong opposition from ultra-Orthodox political parties, which won 16 seats in the incoming parliament.

On Tuesday, United Torah Judaism — one of the two ultra-Orthodox parties at hand — stressed they were not prepared to compromise over Lieberman’s demands, even at the risk of Netanyahu failing to form a coalition.

“We have already proven we won’t have a problem to face another election,” the party said in a statement.

Ultra-Orthodox Jews make up some 10 percent of Israel’s population of nearly nine million.

The coming months are also expected to see the unveiling of US President Donald Trump’s long-awaited plan for Israeli-Palestinian peace.

Trump has shown no sign so far that he would be willing to make significant demands of his close ally Netanyahu in connection with his plan, though even minor concessions to the Palestinians could spark opposition from the Israeli premier’s far-right coalition partners.

But the biggest danger hanging over Netanyahu is his potential indictment on charges of bribery, fraud and breach of trust.

Israel’s attorney general has announced his intention to indict Netanyahu, pending an upcoming hearing. He would be the country’s first sitting prime minister to be indicted.

Netanyahu is not legally required to resign if indicted, only if convicted with all appeals exhausted, but political pressure would likely be intense.

Many analysts said one of Netanyahu’s main motivations in calling early elections was to be able to confront the charges with a fresh electoral mandate behind him. (Agencies)