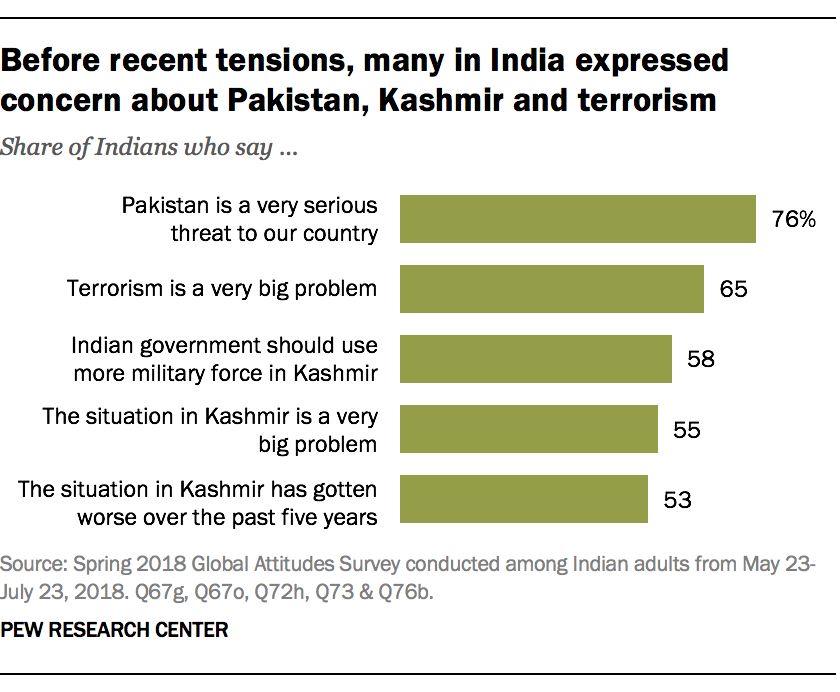 Srinagar: A research conducted by the American based Fact Tank has revealed that a majority of Indians, 55 per cent, see the situation in Kashmir as a very big problem.

The respondents have stated that more than 53 per cent people say circumstances in Kashmir have gotten worse over the last five years, and a majority, 58 per cent, believes the Indian government should use more military force than it uses currently in dealing with tensions in the area.

“Indians largely view Pakistan as a threat and believe the situation in Kashmir warrants more military force. The recent escalation in tensions between India and Pakistan after the Pulwama attack has turned the long-running territorial dispute over Kashmir into a potent campaign issue for Modi,” it states

In the Center’s spring survey last year, 76 per cent of Indians said Pakistan is a major threat to their country, including 63 per cent who said it is a very serious threat. “This view was shared by people in rural areas and urban centers, supporters of both the prime minister’s BJP and the Congress party, as well as Indians across age groups.”

Additionally, 65 per cent said terrorism is a very big problem in India.

“In the aftermath of the violence in Pulwama, Indian social media platforms saw such an uptick in fictitious or purposely misleading stories related to the attack that the head of Facebook India’s Integrity Initiatives tweeted that he had never seen anything like this before,” the Fact Tank said in its report.