Mehbooba fumes over ban on Jamaat-e-Islami, detention of teachers 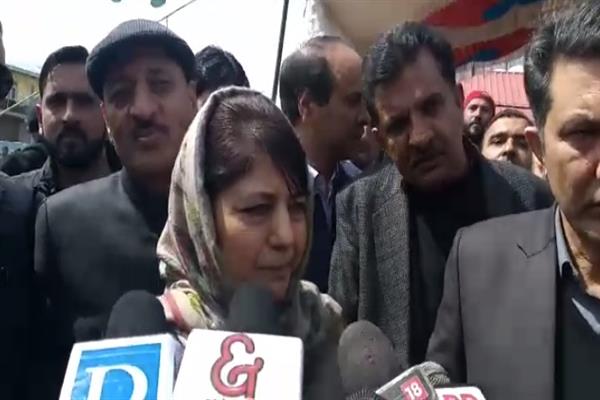 Srinagar: Peoples Democratic Party (PDP) president and former  Chief minister Mehbooba Mufti on Sunday once again intensified her campaign against ban on Jamaat-e-Islami, detention of teachers and others during a public rally at Kupwara where she said, “BJP can cage people but not the ideas.”

Talking to reporters on the sidelines of public rally, Mehbooba said, “Arresting Jamaat activists does not mean that the ideology Jamaat-e-Islami propogates will end,” adding that,

“People can be caged but not the ideas.”

In reply to a question over the BJP demand for filing an FIR against her over her remarks against ban on Jamaat-e-Islami and summoning of Hurriyat Conference (M) chairman Mirwaiz Umar Farooq to Delhi and detention of people including teachers Mehbooba said:

“Let BJP file an FIR and jail me. I want to tell them that they can cage people but not the ideologies.