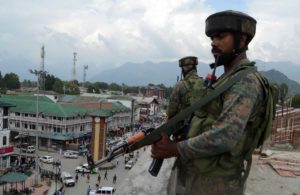 Srinagar: Two militants were killed in an encounter at Khumriyal area of Lolab in north Kashmir’s Kupwara district.

SSP Kupwara Ambarkar Shriram Dinkar  said that the joint team of SOG and army launched a search operation in Khumriyal.

As the joint team approached the suspected spot the militants opened fire triggering off a gunfight, SSP said.

He said that in the ensuing gunfight two militants have been killed.

The bodies of the duo has been recovered along with as many weapons, SSP said, adding that the identity of the slain is being ascertained.

The operation in the area is ongoing, he said.

The police identified the slain militant as Bilal Ahmad Shah, a resident of Shatmuqam and Zahoor Ahmad.

The police said the duo were affiliated with Hizbul Mujahideen.

“Both the terrorists were involved in several attacks on the security establishments and civilian atrocities in the area. Besides one AK 47 and one INSAS rifle was recovered back from the terrorists which was yesterday snatched from a policeman in Kandhar area of Kupwara,” the police said.

No collateral damage occurred during the encounter.