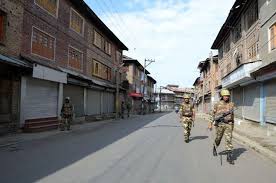 Srinagar: Life remained crippled for the second day on Tuesday in south Kashmir district of Kulgam.

On Sunday three Lashker-e-Toiba (LeT) militants, including a foreigner, were killed in an encounter by security forces at Khudwani.

Meanwhile, mobile internet service in most parts of south Kashmir also remained suspended as a precautionary measure to prevent spread of rumours. However, train service is  running smoothly.

Shops and business complexes remained closed and traffic was off the road in Kulgam.

Additional security forces had been deployed at sensitive places to avoid any untoward incident. Work in government offices and banks was affected due to strike.

However, schools remained closed on account of summer vacation. Situation elsewhere in the south Kashmir was normal.