‘Dialogue is a golden opportunity for Hurriyat’-Deputy Chief Minister 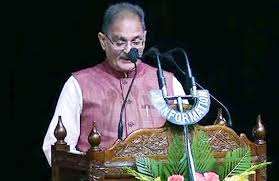 Srinagar: Deputy Chief Minister Kavinder Gupta on Wednesday said that dialogue offer from Delhi to Hurriyat Conference is a “golden opportunity” for it to join dialogue process for lasting peace in the state.

He also said that India is a secular country which has given the youth of Kashmir a golden chance to join mainstream.

While talking to media persons he said “we have always extended hand of friendship to both Pakistan and as well as Hurriyat in Kashmir”.

Dialogue is a golden opportunity for Hurriyat Conference which no other government can give to it but we are yet to hear the response from the Hurriyat Conference. They should join dialogue process for lasting peace in the state.”

He added “we have given a golden opportunity to stone pelters in Kashmir to join mainstream,” he said adding, “India is the only secular country in the world where Muslims, Hindus, Sikhs, Christians and people of other religions live in harmony”.

He further said “corruption has taken roots during last seventy years and it will take time to smoothen the system of transparency and accountability in the state but I assure that no corrupt official will be spared.”