More forces to be deployed on Eid day to monitor situation 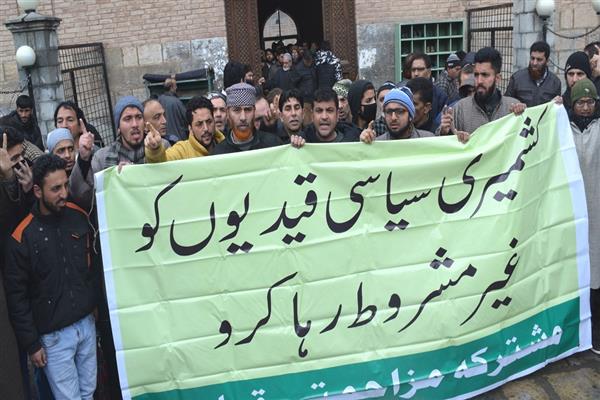 Srinagar: The government is unlikely to release political prisoners on the eve of Eid-ul-Fitr, a local news gathering agency, Kashmir News Service reported.

Quoting a senior police official, the agency reported that police was yet to take any decision over releasing of any political prisoners.

“Moreover it was outside the domain of police to release any prisoner on its own. No such decision has been taken since we have to adhere to the court orders before releasing any prisoner,” official said.

Hurriyat leaders have been demanding the release of all the political prisoners before the Eid.

Meanwhile, the government has decided to deploy more forces during the upcoming Eid even as the police and civil administration have been instructed to monitor the situation closely from the respective district headquarters.

According to the government sources, senior police and administrative officials have also been directed not to leave the headquarters, without the prior permission of the designated authorities.

This step according to official sources has been taken to keep proper vigil on the situation.

“The activities of all those youth who had been arrested, released on the charges of stone pelting in the past are being properly monitored,” the police official said while explain that measures are being taken up to monitor the situation on Eid.

“There will be additional deployment of security forces in various place in Srinagar, Sopore, Tral, Pulwama, Anantnag, Kulgam and other places that witness frequent protests”.