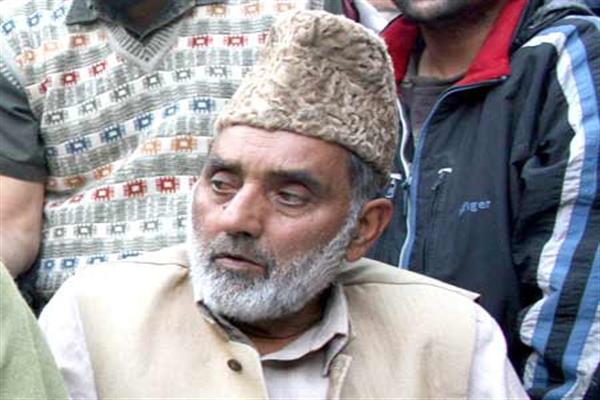 Srinagar: Defending his “right” to collect a pension from the state, former General Secretary and senior Hurriyat (G) leader, Ghulam Nabi Sumji, said some government agencies were raking up his pension issue in an effort to derail the talks offer made by Government of India (GOI).

“As you know, the Government of India has offered talks to carry forward the process of resolving the Kashmir dispute, but some vested interests are deliberately making it more complicated by diverting the attention so the peace process gets derailed,” Sumji told The Kashmir Press.

“If taking a pension is so wrong, then why did people not criticise me before this? Why are people criticising it now? Why did the agencies not leak this information earlier? The timing is important, please note that.”

Home Minister Rajnath Singh had earlier said that they were ready to hold talks with the Hurriyat. In response, the joint resistance leadership said that they wanted to join the process  provided Delhi made its stand clear, as the talks offer was too ambiguous.

Asked whether it was morally right for a resistance leader to oppose the system but simultaneously take benefits from it, he said that many resistance leaders do not accept pensions from the state, but it was their personal decision.

“It is not a collective decision by the resistance movement,” Sumji said.

“If I am getting a pension and have applied for a hike in it, what is wrong in that? It is my personal decision, and I will stand by it,” he told The Kashmir Press.

In a brief interview with The Kashmir Press, Sumji said that he as an individual has to decide whether taking a pension was “haq or na haq” (right or wrong).

“I will continue to take my pension, as it is my right”.

Sumji had applied for the revision of his pension after amendments were made to the principal law governing rates in 2018.

When asked about the widespread criticism on social media regarding his collecting a pension from the state, Sumji termed his critics as “miscreants” whose aim is “to defame and demoralize the resistance movement so that they can divide and rule.”

“Trust me when I say that there is nothing wrong with it. It is not asking for charity, it is my right,” he said.

Before joining resistance politics, Sumji served as a legislator in the State Assembly from 1987 to 1989.

Sumji applied for the revision of his pension after the state assembly had passed an amendment to the principal Act of 1984, which significantly raised the rates of the pensions of retired legislators.

He is one of the richest men among the Hurriyat leaders.

Hurriyat (G) insiders revealed that they have asked Sumji to clear his position regarding the pension matter.

“He told us that the taxes he pays are higher than the benefits he receives,” insiders said.

“He said he will not stop taking his pension”.

Sumji is the chairman of his faction of the Muslim Conference, and his party is a constituent of the Hurrriyat (G).

The other faction is headed by Professor Abdul Gani Bhat, a constituent of the Hurriyat( M),  from whom Sumji parted ways a long time ago.