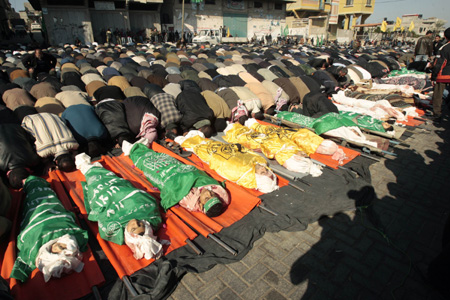 During the protest demonstrations in Gaza since last few days at least 60 people were killed and thousands were wounded by the Israeli forces. However, the toll could have been even higher without a recent emergency health care innovation.

Called ‘trauma stabilisation points’, or ‘TSPs’, these large tent-like structures are located within minutes of the frontline and serve as the first point of care in the trauma-care pathway (from injury to pre-clinical trauma management, surgery and ultimate recovery), a WHO Eastern Mediterranean report on Saturday said.

In a TSP, life- or limb-threatening cases are reanimated, stabilised, and then referred to hospitals for definitive further treatment. With these first crucial steps, TSP health workers can save additional lives in Gaza while taking some pressure off hospitals, which are being overwhelmed with injured patients.

One such patient, who came through a TSP, is Waleed. Waleed was shot in his left leg during last Friday’s demonstrations and immediately brought to the nearest TSP only 3 minutes away. There, doctors determined the severity of his injuries, stabilised his wounds, administered IV fluids and analgesics, and prepared him for hospital transfer.

After surgery, he will have to rest for several weeks and use crutches but with the intervention at the TSP, Waleed managed to avoid permanent damage to his leg, and possibly an amputation.

Waleed is relieved: “I cannot afford to be on crutches for long, while my home is destroyed. I must continue the chores at home and ensure my sister Amina’s reading classes. Who else will do it? My father was blinded in 2014 as a result of an explosion during the 2014 war and my mother died of cancer when I was 4 years old.”

In Gaza, the World Health Organisation (WHO) has supported the Ministry of Health to upgrade the 5 TSPs close to the site of the largely peaceful demonstrations and enhance coordination with the additional five established by the Palestinian Red Crescent Society (PRCS).

In addition, WHO provided medical supplies to Gaza including drugs, disposables and assistive devices for patients like Waleed.

WHO also coordinates the Gaza Trauma Working Group, a coordination group which improves clinical standards, patient referral, and documentation of trauma patients. On May 15, WHO also activated its global emergency medical teams (EMTs) network in order to more effectively respond to the humanitarian crisis.

Waleed is far from the only injured person. Since the start of the demonstrations on March 30, over 12,000 people have been injured, including 3,500 who have gunshot wounds.
The influx of people with injuries has overwhelmed the healthcare system in Gaza, which was already in crisis before the demonstrations began; WHO reported in May that 40 per cent of nearly 500 essential medicines were completely depleted in Gaza.

“Our surgeons are exhausted,” says Dr Medhat Abbas, director of the Dar Al Shifa hospital.
”Our capacity has reached its limit. We cannot cope, even with surgeons and specialists, practitioners and volunteers,” Dr Abbas said, acknowledging that without the work of surgeons and nurses in the TSPs, hospital capacity and the quality of emergency care may have collapsed: “TSPs have greatly reduced the burden on hospitals; there is no question about it.”

With proper rehabilitation and help from specialists, Waleed and all other injured people in Gaza have a new hope for a full recovery and a healthy future.