‘Urgent need to reach out to people’ 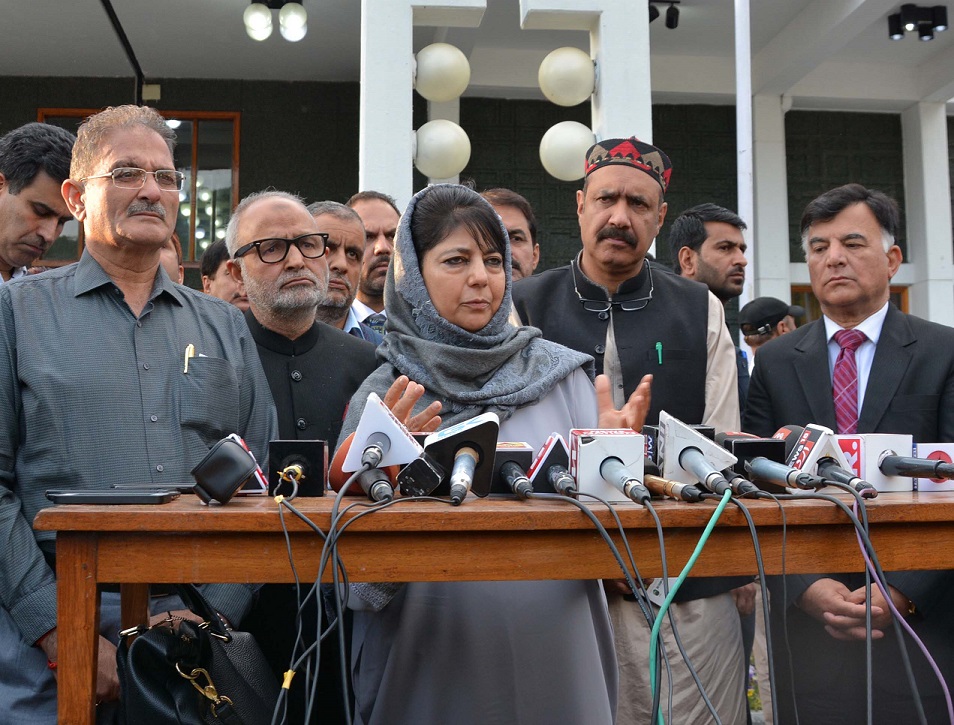 Talking to reporters after the all-party meeting concluded at SKICC, Mehbooba said: “It was the unanimous decision of all parties during the meeting that the Government of India (GOI) should consider ceasefire during Ramadhan.”

She said that there was consensus among all political parties that there should be a Ramadhan ceasefire like the one announced during the time of the then prime minister Atal BihariVajpayee.

Mehbooba  said that an all-party delegation would also meet the Prime Minister Narendra Modi to discuss the outreach.

Cheif Minister Mehbooba was speaking to media in the aftermath of the All Party meeting called to discuss the Kashmir situation in the wake of shopian and Srinagar killings.

On Sunday, five militants and five civilians were killed during clashes with government forces in Shopian. A tourist from Chennai was killed during stone-pelting in Baramulla on Monday.

The Chief Minister asked all shades of political opinion to rise above party politics and play their role in giving youth of the State a safe and secure future.

“This is the concern of all of us because in peace lie the stakes of every section of society for which we all should strive jointly”, she said in her address.

Mehbooba underscored the need for apprising New Delhi of the urgent need to reach out to the people of the State and listen to their story of pain and sufferings.

She said suggestion during the meeting also came of constituting an All Parties Delegation (APD) to apprise the Prime Minister, Narendra Modi of the emerging challenges in Jammu & Kashmir and the urgent need to reach out to people in the light of his last Independence Day speech.

A local news agency reported that that Chief Minister said that it is important to revive the dialogue process. “My government will act as a facilitator if tangible steps are taken to reach out to all the stakeholders,” sources quoting CM said.

The wire agency also reported that the all party meeting Chief Minister expressed her concern about the killing of tourist “it was unfortunate that the tourist was killed. Such incidents spoil our image and do a serious damage to the tourism industry,” the CM has said.

One of the participants in the all-party meeting discussed a Ramzan ceasefire along the lines of Vajpayee’s initiative to stop violence in Jammu and Kashmir.

“The basic idea was to make Ramzan as peaceful as possible and hopefully start a new dialogue,” the participant added.

The leader said that the meeting pushed for dialogue within and beyond the state with Pakistan.

Sources said that other parties including Congress, BJP, CPI (M), Peoples Conference, PDF and others attended the five-hour long meeting.

PDP senior leader and R&B minister Nayeem Akhter said that that the general feeling among the participants in all-party meeting was that there should be a political outreach on Kashmir.

“The general feeling is that there should be a political outreach on Kashmir,” Akhtar told reporters at the SKICC.

Engineer Rashid, the chief of Awami Ittehad Party after the All Party Meet, said that during the holy month of Ramzan, Government of India should announce a unilateral ceasefire and stop anti-militancy operations.

Talking to reporters at SKICC in Srinagar where an all-party meeting chaired by Mehbooba Mufti is underway, Rasheed said that the anti-militancy operations should be stopped forthwith to end the bloodshed in the Valley.