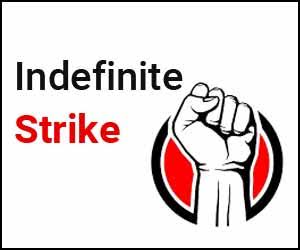 The aggrieved AEEs and AEs have written to the Executive Engineer REW and stated that the strike will continue till the matter is resolved.

The letter reads that during a review meeting with DC Kupwara on 16-01-2023, the AEEs/AEs were humiliated, abused and unparliamentary language was used for the matter, which were not mandated/vested to AEEs/AEs.

“Words like Bastard, Third-Class, Thieves were used which goes against the CSR rules,” it reads, adding that AEEs/AEs of REW Kupwara will go on indefinite strike till the matter gets resolved.

An Assistant Executive Engineer (AEE), looking for Sogam and Wavoora belt told KNO that during a review meeting, he was abused and called Deadwood.

When contacted, Executive Engineer REW, Shafqat Hussain, said that he was on leave for some days as he’s not feeling well.