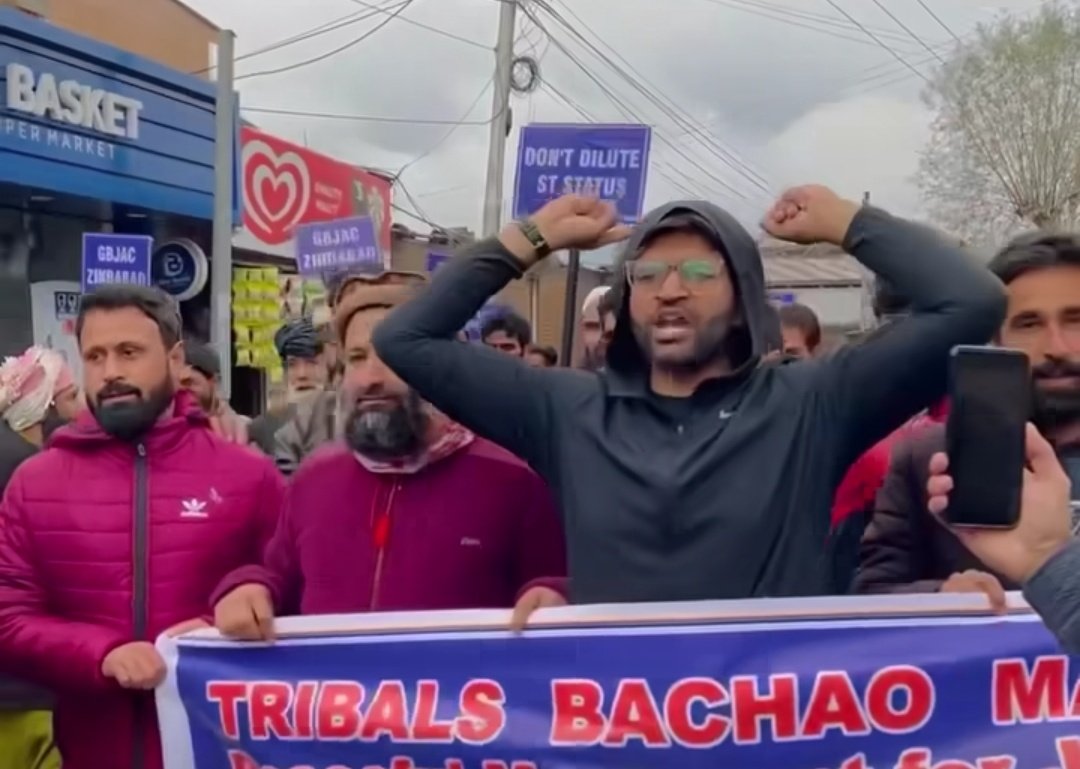 Ganderbal, Nov 08: The foot march started by Gujjar-Bakarwal leaders from north Kashmir’s Baramulla district to “safeguard the rights” of the community continued for the fourth day on Tuesday and reached central Kashmir’s Ganderbal district.

Yousaf said the march is a protest against the decision of the Registrar General of India and the National Commission for Schedule Tribes to accept the recommendations of Justice G D Sharma Commission report to notify Paharis as Schedule Tribes.

The Gujjars believe the move will dilute the status of the Scheduled Tribe and hinder the upliftment of the community.

“We appeal to the Government of India not to dilute the status of Schedule Tribes and protect the tribal identity of less-represented, underprivileged and marginalised Gujjar-Bakarwals of Jammu & Kashmir,” DDC member Kangan B, Miyan Amjid Hussain, who joined the march on Tuesday, said.

He appealed to the youngsters of the community to “join the march and boost the morale of the volunteers”.

Rafiq Bhalote, Block Development Chairman from Uri who is also the General Secretary of GBJAC, led the foot march along with a number of volunteers from Tehsil Kangan, Lar, Ganderbal.

Talking to media persons, he said, “The National Commission for Schedule Tribes had no member from ST and OBC community, and recommended upper caste communities like Brahmins, Syeds, Rajputs and other influential groups for Schedule Tribe who were not even notified as backward classes till date.”

“In Jammu & Kashmir, they (Paharis) are already enjoying Pahari Speaking People (PSP) reservation on the basis of language which is not even Pahari but a dialect of Punjabi. Declaring a group of religious communities and a number of upper castes as Schedule Tribe will be injustice with the ‘real tribals’ of the country,” Bhalote added.

Scores of activists from various parts of the valley joined the march and were welcomed by Haji Yousaf.

Talib Hussain, a noted activist and spokesperson of the GBJAC said, “Till yesterday they (Paharis) were getting reservations on the basis of language and now they are referred to as Pahari Ethnic Group. Their ethnicity is debatable.”

He questioned the government’s intentions to call a “heterogeneous” group of communities an Ethnic Group. “These upper castes are culturally, religiously and linguistically a diverse group which can never be ethnically same,” he said.

Talib explained: “How a Syed can be ethnically the same as a Brahmin? Syeds claim to have come from Arabia; they can never be the same as tribals or other communities residing in Pir Panjal, Baramulla and Kupwara. A Kashmiri living in Rajouri, Poonch, Baramulla, and Kupwara has the same ethnicity as the one living in Srinagar, Anantnag and Kishtwar. How can a Sikh, Upper Caste Hindu and a Muslim Syed or Rajput have the same bloodline or be ethnically same?”

The tribal leader questioned the report of Justice G D Sharma and said the commission has “made a mockery of social justice” by including those groups and communities in the proposed Schedule Tribe list “who have been rulers in the past; and economically, socially and politically well-off”.

He demanded immediate reconstitution of the Jammu and Kashmir Backward Commission and asked for the resignation of the Chairman of the National Commission for Schedule Tribes. “This is an attack on the tribal identity of ‘real tribals’ and our movement is a peaceful struggle to save the Constitution of India,” he said.

Amir Khatana from Jammu also addressed the media saying that the “Tribal Bachao March” across the Union Territory of J&K will spread awareness among the tribal community living in the far-flung areas against the dilution of the Schedule Tribe status.

The Gujjar-Bakarwal community is the third largest ethnic community in Jammu & Kashmir after Kashmiris and Dogras having a population of more than two million. They were notified as Schedule Tribe in the erstwhile state of Jammu & Kashmir in 1991 after a long struggle of around four decades.kno