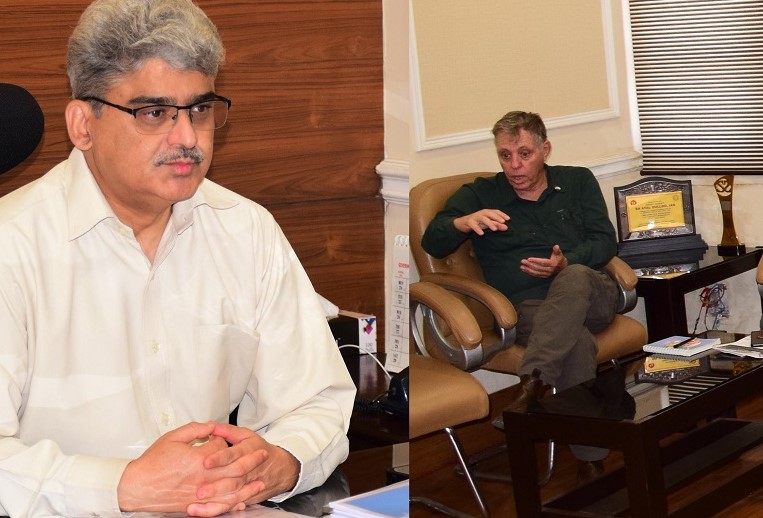 Briefing the ACS, the Agriculture Attache informed that India and Israel have a strategic cooperation on the Government-to-Government (G2G) level in the field of agriculture.

He said the IIAP aims at introducing crop diversity, increasing productivity and optimizing water use efficiency and added that IIAP is being implemented via establishment of Centers of Excellence (CoE), in which Israeli Agri-Technologies and knowledge is disseminated and tailored to local conditions.

He added that the Israeli stakeholder, MASHAV will guide the standard of the CoE and transfer the Israeli knowledge into the IIAP.

He apprised the ACS about his visit to three farms in Jammu division, which include SM farm Chinore, SM Farm Chakrohi and Burmal Farm Hiranagar, while informing him that the region has potential to produce vegetables and fruits by using modern technology for which MSHAV is ready to extend guidance and support in the form of expertise and technical knowhow to the farmers and the department alike.

He informed that CoE are advanced, intensive agriculture farms for knowledge transfer of Israeli Agro-Technology and latest technology and aims to benefit farmers with a focus on selected key crops.

Each CoE will be comprised of nursery management, best practices cultivation techniques, irrigation, and fertigation and also acts as a meeting point for academy, government and farmers to cooperate towards fruitful achievements.

He said that MASHAV (Israel’s agency for international Development Cooperation) is leading the IIAP from the strategic and tactical aspect while providing professional leadership during planning and executing phase, transfer of knowledge and agro-technology.

He added MASHAV is ready to establish two CoE one each in Jammu and Kashmir divisions for which Detailed Project Report would be prepared in consultation with the Agriculture Department.

Director Agriculture Jammu, KK Sharma informed that CoE would be established under Mission for Integrated Development of Horticulture (MIDH) scheme with authorizing, budget and monitoring the project while State/UT governments allocate staff, land and other budget.

Speaking on the occasion, Dulloo said that J&K has some niche crops like apples, walnuts, saffron, etc where we can focus while seeking guidance from Israeli experts and make these crops export worth internationally.

He said J&K has extensive plans to develop agriculture scene for which it is seeking expertise and technological interventions to increase productivity and make the crops worth for competition at international markets.

The team has concluded its three-day visit to Jammu division and is expected to visit Kashmir also to explore the establishment of CoE in Kashmir valley.

The team visited the Jammu on the request from Director Agriculture Jammu, KK Sharma.