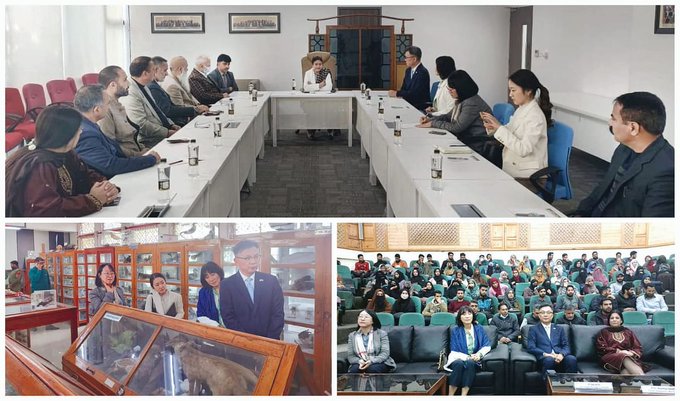 Srinagar, Nov 01: The Korean Ambassador to India Jae-bok Chang Tuesday visited the University of Kashmir with top officials of the Korean Embassy in an effort to develop future cooperation and partnership in the ‘mutual areas’ of academics, research and culture.

Vice-Chancellor Prof Nilofer Khan warmly received the delegation at the Vice-Chancellor’s Secretariat where she enlightened the visiting delegates about the academic and research progression of the University over the years, including its current status of being one of the foremost academic institutions in the country assessed as ‘A+’ by the National Assessment and Accreditation Council.

According to a statement, the visiting delegation thereafter interacted with top academic administrators and officers of the University at a session chaired by the Vice-Chancellor.

Speaking on the occasion, Jae-bok Chang said the delegation aims to develop cooperation and future partnerships in the domains of mutual interest related to academics, research and culture, among others.

“We want an increased people-to-people contact between India and South Korea. Under our global education programme, we have taken 24 Indian students in 2021 and this figure is expected to rise in the current year,” the Ambassador said, assuring that the Korean Embassy will make “more efforts” to develop more partnerships.

He said this visit is the “beginning of our relationship with the University of Kashmir and we look forward to working closely with you to develop future cooperation.”

At the meeting, top University officers including Dean Academics, Dean Colleges, Dean Research, Registrar, Controller of Examinations, Director Admissions, Director DIQA, Dean Students Welfare and Chief Proctor put forth their valuable suggestions about areas which could be explored to develop such tie-ups.

Terming the Korean delegation’s visit as “very important”, the Vice-Chancellor hoped that such interactions will create opportunities for collaborative research, cultural exchange programmes and scholarships avenues for our students and research scholars.

The visiting Ambassador sought from the University detailed proposals where such collaborations could be developed and assured to work towards realising the goal.

Jae-bok Chang later gave a power-point presentation before the varsity students on ‘India-Korea: Partners with Shared History and Common Future’, discussing in detail the India-Korea historical relations, Korea’s trade ties with India, Korea’s economic development and progression towards democracy and the deep-rooted historical and cultural bonds between the two countries. He also interacted with students on a range of academic issues during the session organised by the Department of Students’ Welfare.