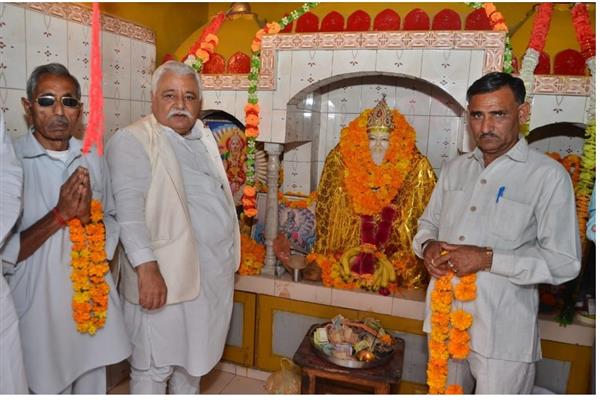 Jammu October 30: Senior National Conference leader Ajay Kumar Sadhotra today slammed the BJP for its failure in sustaining the gains of heralding peace and normalcy in the Valley during the past eight years, leading sense of insecurity among non-locals in general and the Kashmiri Pandits in particular.

“BJP must shun the ostrich syndrome and accept the ongoing reality of Kashmir where from the fresh migration of the KPs, who had opted not to leave in 1990, has unfortunately again triggered as the government has failed in instilling sense of security among them post target killings”, Mr Sadhotra said while addressing a function at Mishriwalla in Jammu North Assembly Constituency, held in observance of the Vishwakarma Diwas this afternoon.

Sadhotra advised the BJP to accept the realities, instead of indulging in blame games and mudslinging against the established political establishment of the state. They must spare some time to go through the history of J&K, including that of the recent times post 1990, and know the pluralistic ethos of this place. He said the so-called senior BJP leaders are unaware of the great role played by the National Conference in fighting the tribal raid and more recently the cult of terror violence, which has claimed so many lives of the cadre, including the senior leaders and even the serving ministers.

How can the role of Dr Farooq Abdullah and  Omar Abdullah be undermined, whose relentless efforts witnessed normalcy returning back to the Valley and peace heralding across the State, he asked, saying that all the gains of the decades due to relentless and focused efforts of the NC leadership have got washed away by anti-people and myopic policies of the BJP.

He said the fresh exodus of the minority community speaks volumes about the much trumpeted normalcy claims of the government, both at the Centre and the State, which they have reduced to a Union Territory, thus belittling the people of Jammu and Kashmir. He said the PM Package KP, as also the Dogra employees, have been on protests for months together and nobody in the government appears to be serious in mitigating their problems.
Reportedly most of them are without salaries and they are being forced to run a helter skelter for seeking redressal of their issues, he added.

Sadhotra asked the BJP to stop living in make believe world, as the people of Jammu and Kashmir cannot be swayed anymore by rhetoric and reactionary politics. He said the BJP has not only failed on the security front in this sensitive part of the country but has let the people down on economic, employment and development fronts as well. To conceal its failures, the BJP is resorting to short cut of character assassination of the adversaries, he added.

Paying his tributes to the migrant labourers who lost their lives recently in the Valley due to lack of security provided to them by the government, Mr Sadhotra hailed the skilled and unskilled workforce in pushing the economy of Jammu and Kashmir. Be it farm labour or construction sites, they are present everywhere and contributing in the national reconstruction.

Congratulating the workers on Vishwakarma Diwas, he thanked Vishwakarma Committee Mishriwala for inviting him as Chief Guest.

Sadhotra appealed the government to address the issues the Vishwakarma Samaj facing over the years, especially of 27% Reservation in view on the analogy of One Nation One
Law.
He paid obeisance and sought blessings of Bhagwan Vishwakarma and also paid tributes to the craftsman deity Vishwakarma, a divine architect, and prayed for blessing to the entire humanity across the world. Prominent among those present on the occasion included Raghubir Singh Manhas District President, Dr. Rajinder Sharma, Ghar Singh Corporator, Randhir Singh Chib, Rakesh Sharma, Ankush Abrol, Dr. Vikas Sharma, Bhagwan Dass Sharma and Ajeet Singh Lambarda.