J&K situation is ‘fast deteriorating’ worse; ‘Centre was choking even the breathing space of people of J&K’ alleges PAGD 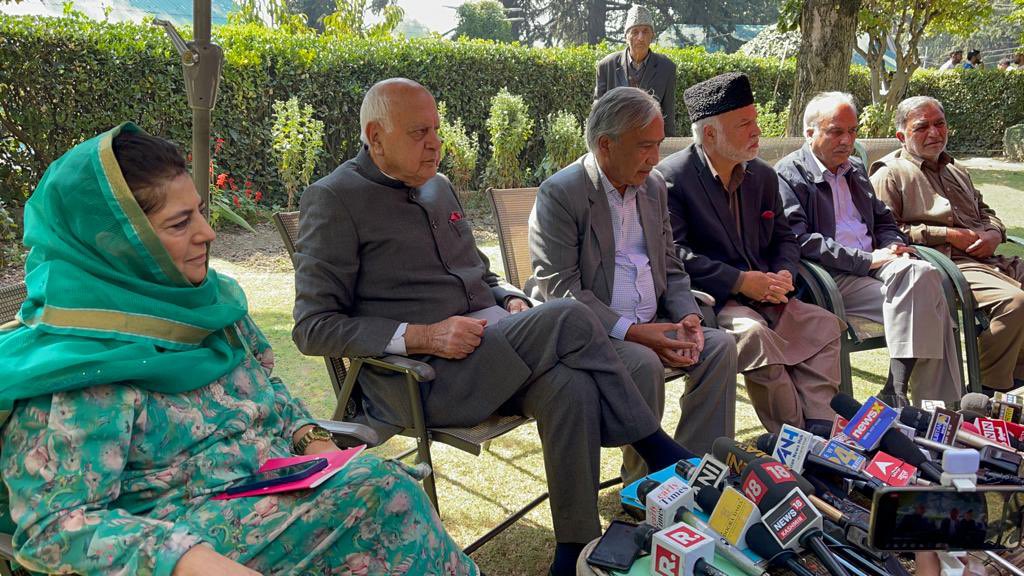 Srinagar, Oct 15: Expressing anguishing on what it termed as the “fast deteriorating situation in Jammu and Kashmir,” People’s Alliance for Gupkar Declaration (PAGD) Saturday alleged that the “Centre was choking even the breathing space of people of J&K, leaving them suffer on every front.”

“After taking away the constitutional right of Article 370, other ways of survival are being gradually choked. Civil liberties, freedom of press, freedom of speech is under assault while police stations and jails are being filled with innocent people,” said Tarigami, who was flanked by PAGD chief Dr Farooq Abdullah, PDP president Mehbooba Mufti, ANC vice president Muzaffar Shah and others.

If giving voting rights is prerogative of EC, how come orders coming from Govt;

Where are 50,000 jobs promised by Govt, asks Dr Farooq

Tarigami said that it was high time that people and the political parties of J&K must wake up and raise a collective and united voice against the “present onslaught of New Delhi on people here.”

He said that outside every police station, parents are waiting to see their children out.

“Outside jails have now no capacity given the number of people of Kashmir lodged there,” Tarigami alleged.

He termed the frequent visits of Union Ministers as a “move to push people of Kashmir to wall further.”

“These ministers are coming to ensure suppression is tightened further and whosoever raises is put behind the bars,” he said.

He said that if J&K is being converted into Gujrat model; why sale of liquor, beer and drugs is being allowed freely.

“On the next day of order, the media is being told that the order stands withdrawn. Isn’t this a mockery of democracy?”

Meanwhile, replying to a query, PAGD chief Dr Farooq Abdullah asked the government where are the 50,000 jobs promised by it.

“Situation is grim as the number of unemployed youth is swelling. I visited Marwah, Dachan in Jammu region and found that a Sub-District hospital has no doctor at all,” he said.