‘Rather than inching towards promised normalcy, J&K only seeing worsening of situation’: Farooq Abdullah 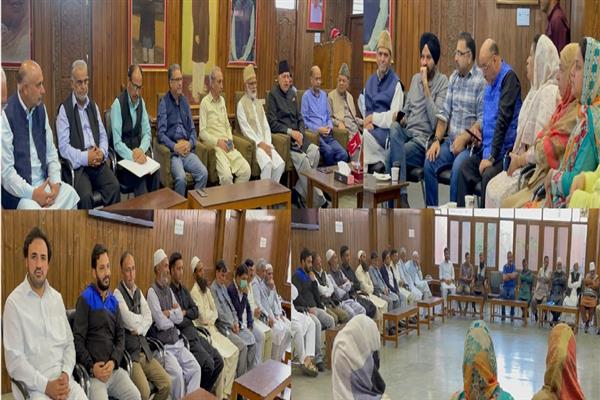 Srinagar October 10:  National Conference (NC) President and Member of Parliament  Farooq Abdullah on Monday said rather than inching towards promised normalcy, J&K is only seeing worsening of the situation.

“Rather than inching towards promised Normalcy, J&K has only seen worsening of the situation. J&K continues to witness political vacuum, unemployment, development deficit, misgovernance. The troubled legacy of 2019 and subsequent enactments paint a bleak picture of the region’s future,” Abdullah said while addressing the party functionaries at working committee meeting of district Budgam here at the party headquarters Nawa-e-Subha, Srinagar.

“The real object of BJP is to push the real representative voices to the background and denude its plural and unique identity. The people of Jammu and Kashmir: Kashmiris, Dogras, Gujjars, and Paharis won’t allow this to happen. The mood and sentiment of the people in Chenab, Pir Panjal and everywhere else is the same. People of J&K, no matter which region, religion and division, they belong to, have made it a point to stand up for their rights,” he said, adding that there was a ground swell of anger against BJP, and its A & B teams across J&K.

Exhorting the party functionaries to intensify their public contact, he said, “Our cadre has to reach every door step and educate people about the imminent threats to our future. Forces, which we are fighting, are conniving to weaken our political voice by creating divisions among us. They are working day in and day out to divide us on a regional, religious, and cultural basis. The efforts to divide us will receive further increase, as the people are seeking answers from them now. Any claim of normalcy and development in Jammu and Kashmir at present looks like a far cry from what the BJP government had intended while taking the decisions of August, 05 2019.”

During the breadth of the meeting, the functionaries gave their constructive feedback to the party president about the ongoing party affairs and other organisational matters.

He said NC will make every effort to give voice to aspirations, demands of people of Jammu and Kashmir.

In memory of stalwart OBC leader Late Mulayam Singh Yadav, Dr Farooq along with party functionaries observed a one minute silence and paid rich tributes to the departed leader.