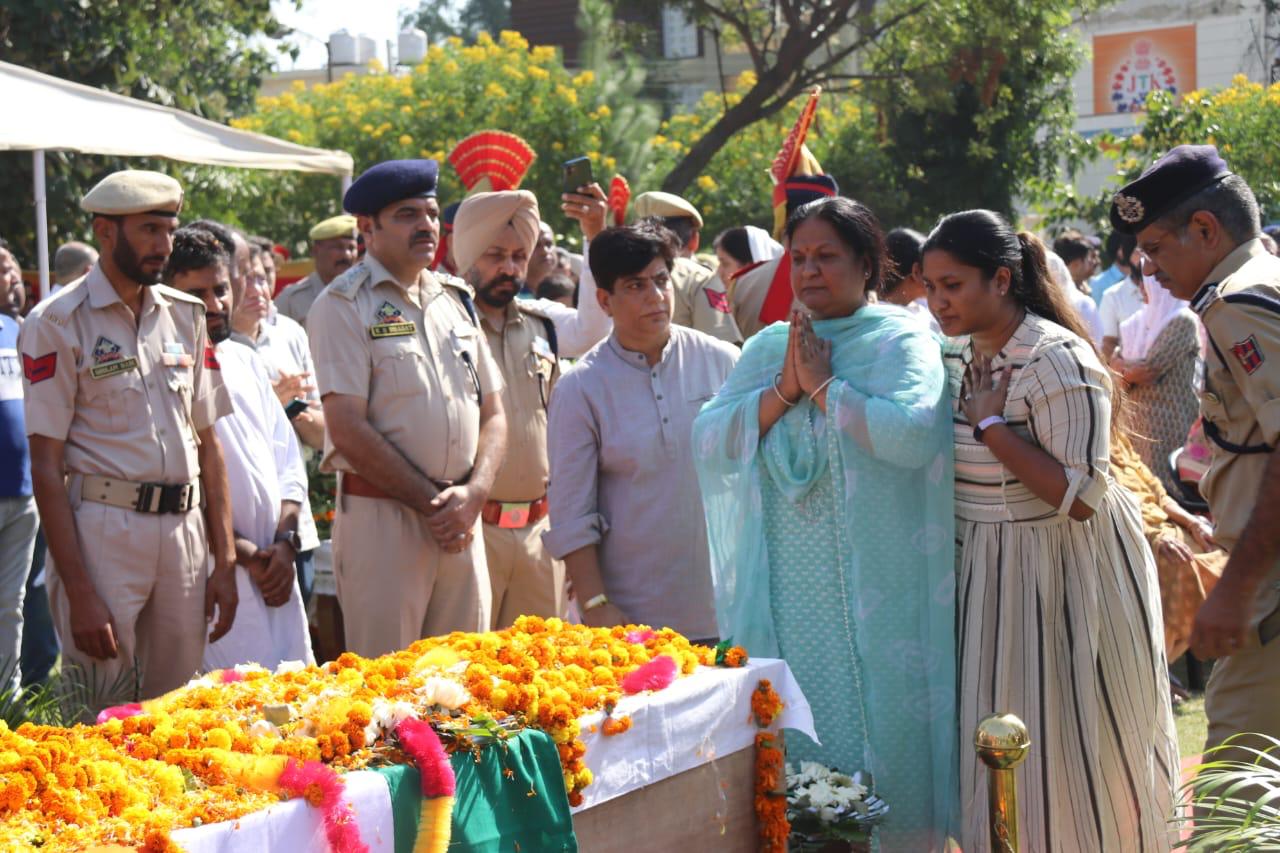 Jammu, Oct 05: Jammu and Kashmir Director General (Prisons) Heemant Kumar Lohia was cremated with full state honours here on Wednesday, two days after he was murdered by his domestic help in Jammu.

The body of the slain officer was handed over to his family this morning for last rites after completion of legal and medical formalities.

Later, a coffin carrying the mortal remains of the officer, wrapped in the Tricolour, was taken to police lines Jammu, where a wreath laying ceremony was held to pay homage to him.

His family members including wife Madhu Lohia, daughter and son were present at the wreath laying ceremony, which witnessed emotional scenes as many of his relatives broke down.

His wife controlled her emotions and was heard telling the ADGP headquarters M K Sinha “she will not cry.”

“It is a very unfortunate incident as we have lost a dynamic and courageous officer. His departure is a big loss for the J&K police and the nation as a whole and the void left by him is impossible to be fulfilled,” Sidhu told reporters.

After the wreath laying ceremony, the mortal remains of the officer were taken to the Jogi gate crematorium. The body was consigned to the flames amid a gun salutes.

DG Lohia was found dead under suspicious circumstances in a house in the Udaywala area of Jammu on the intervening night of Monday and Tuesday and the police had arrested the suspected accused Yasir Ahmed in his killing.

Ahmed was the househelp of DG prisons who had been working at Lohia’s house for nearly six months and he was reported “quite aggressive” and “under depression” as per some documentary evidence that was seized by the police reflecting his mental state.

Jammu Zone Additional Director General of Police Mukesh Singh saud that no terror angle has emerged during the investigation of the case.

The accused, 23-year-old Yasir Lohar domestic help at the house, was arrested from a field in Kanhachak on Tuesday following a major manhunt.

“No terror angle has emerged during investigation of the case of murder of H K Lohia. Interrogation of the accused is in progress. His disclosures are being corroborated with field investigation,” the ADGP said in a brief statement.

However, terror group People’s Anti-Fascist Front (PAFF) had claimed responsibility for the murder.kno