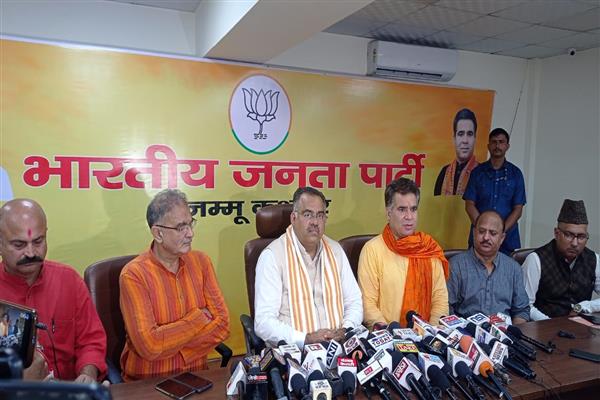 During his visit, he will meet the intellectuals and prominent personalities and will address two public meetings on Oct 1 in Rajouri and will also address another rally in Baramullah on October 2, he said at a presser.

“Amit Shah ji will visit different areas in this visit and this is a special occasion just like a festival as he was the key person to finish the controversial Articles 370 & 35(a) and broke the shackles of J&K residents to free them from long bondage. SCs, women, Gujjars-Bakkarwals and other communities were empowered after been neglected for 70 years. Similarly, Rajouri and Baramullah areas have been neglected for all these years, hence Amit Shah ji has decided to visit these areas and address the rallies there. BJP has tried to politically empower all who were denied due space for 70 years”, said Chugh.

“Modi govt is committed for “Sabka Sath, Sabka Vikas” and not only the Vikas of Abdullah, Muftis. Modi govt has ensured development of J&K constantly despite Covid and other difficulties. Today, J&K Airport are flooded with private airlines. Tourist places like Pahalgam, religious yatras like Vaishno Mata, Amarnath ji are flooded with visitors. Now ‘Pani & Jawani’ of J&K are being utilized for the development of region” said Chugh.

Chugh further said that earlier governments have routed J&K youth towards terrorism and handed over stones to them, whereas the Modi government has given them the powers to use those stones for construction of their careers. Our motto is to progress J&K in completion with other states, he added.

“The residents of border areas were raising demand for the rallies of Amit Shah ji and he affirmatively responded to our request for both the rallies” said Raina.