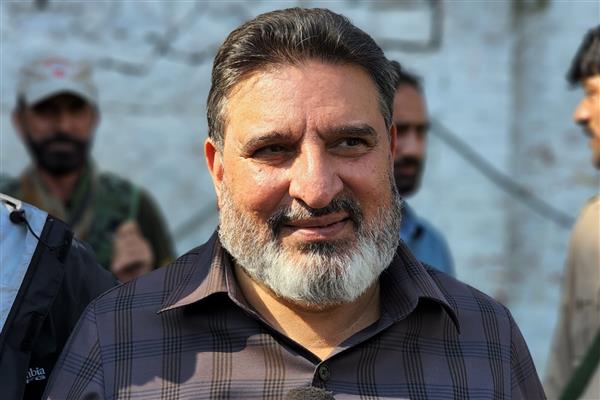 Srinagar, Sep 02: Apni Party has decided to make a formal demand for the restoration of statehood to J&K.

The party has also demanded the release of those who have been kept behind the bars in the name of ‘preventive’ detention in the Valley. Also, the party has urged the administration to stop obstructing job opportunities for the youth using a flawed verification system.

These demands were marked in an extraordinary party meeting and announced by the party President Syed Mohammad Altaf Bukhari in a press conference at the party headquarters in Srinagar Friday afternoon.

According to a press statement issued here, Apni Party President Syed Mohammad Altaf Bukhari presided over an exceptional party meeting at the party headquarters in Srinagar, which was attended by the top leadership and all the district presidents and special invitees.

The meeting, after thorough discussions, unanimously passed a resolution seeking the political empowerment of the J&K people.

The resolution reads: “Since Jammu and Kashmir is without an elected government, the meeting resolved to demand for holding early Assembly elections without any further delay and fast-tracking the electoral process so that assembly elections can be held at an earliest.”

The resolution further said, “In empowering the people of Jammu and Kashmir politically and restoring the lost sense of dignity and honour, Apni Party deems it proper to seek restoration of Statehood at this stage.” “In a federal structure, for better devolution of power, implementation of welfare schemes and good governance, restoration of statehood to J&K integral.” It added.

Also, the resolution urged the protection of the rights of the people. It said, “Protection of people’s rights should be done Constitutionally in J&K and until an elected government is formed. We urge the Prime Minister of India and the Union Home Minister to honour the promises made with the people of Jammu and Kashmir and protect the demography and sanctity of the electoral process. It was also resolved that Apni Party will continue to raise genuine demands of the people and address the political aspirations of the people of both regions of J&K.”

Soon after the meeting, Bukhari while addressing a press conference here announced that Apni Party’s delegation will meet Lieutenant Governor (LG) soon to put forward a formal demand for the restoration of statehood to J&K.

He said, “Not only that Apni Party would approach LG to put up its demand for the restoration of statehood, formally; our leaders in all 20 districts would also communicate with their respective District Magistrates (DMs) with the same demand.”

He also urged the government to release all those who have been arrested in the name of ‘preventive detention.

Bukhari lashed out at the administration for ‘hindering’ job opportunities for the youth by not giving them No Objection Certificates (NOCs) after the verification process.

He said, “If someone’s father had been involved in something wrong in the 90s, how can you punish him for his father’s fault? Many of these youngsters had not even been born at that time, yet they are denied NOCs by the concerned department, making their careers bleak.”

Bukhari also criticized the authorities for canceling the recruitments following the reports of the irregularities in the selection process surfaced.

He asked, “If some irregularities have happened in the preparation of results of the competitive exams, why should students be blamed for that.”

Bukhari added, “Why should common students who have qualified for these exams by dint of their hard work suffer just because someone in the system has indulged in some wrongdoings?”

Accusing that the current administrative system is flawed that makes the prospect of youth bleak, he said, “This draconian system should end here.”

“Why should our youth suffer for none of their faults? Our youth is our future; thus, we cannot tolerate any injustice to them.” He added.