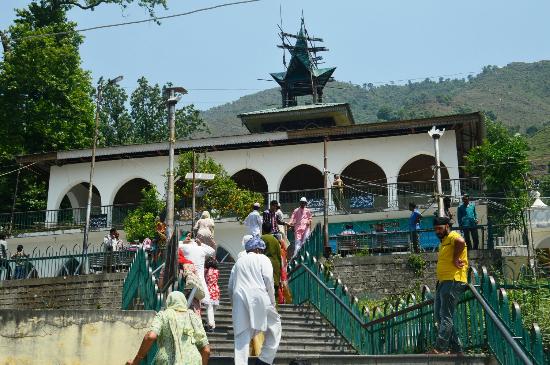 Srinagar, Aug 17: On the receipt of large number of complaints against some people receiving donations forcibly and through exploitative means at the Ziyarats, the Jammu and Kashmir Waqf board has imposed a blanket ban on all such unethical practices across the Shrines of J&K UT with immediate effect.

As per the order issued here, it was given out that despite coming from reasonably sound economic background, such people are permanently occupying particular spots within the shrines for their activities, and there are instances when such spots are being outsourced or contracted out against receipt of large sums of money that violates the sacro-sanctity of the Ziyarats.

It was further given out that such unethical practices damage the sanctity of such sacred places, and is detrimental to the already strained finances of the J&K Waqf Board.

“Such pilferages are severely limiting the ability of the Waqf Board to perform basic duties of charity and carry out activities for the upliftment of the poor and disadvantaged groups of the society, and also limit the ability of Waqf to provide different facilities to the Zaireen and carry out infrastructural improvements at the Shrines” read the order.

The order also mentions that such people were repeatedly warned to desist from these activities, as it also sends a very wrong signal to the Zaireen, who are repeatedly requesting J&K Waqf Board to take stern action against such elements.

Now therefore, “a complete ban is hereby ordered on all such unethical practices across the Shrines of J&K UT with immediate effect. Central Waqf Office shall also be verifying the claims of all those performing different religious activities within the Ziyarats of J&K UT” reads the order.

In the said order, the Executive Officers/ Administrators and staff posted at Shrines/ Masjids have been directed to impose the ban strictly. Any non-compliance of the order is immediately referred to the Central Office, so that a complete ban is ordered on the entry of such elements into pious and sacred places like Ziyarats.

Meanwhile, the staff posted at Shrines/ Masjids were also directed to paste Notices along with Helpline numbers at conspicuous places within Ziyarats requesting the general public to inform them about such elements. Any dereliction or laxity shown by any employee in this regard shall be viewed seriously and shall invite immediate disciplinary action.