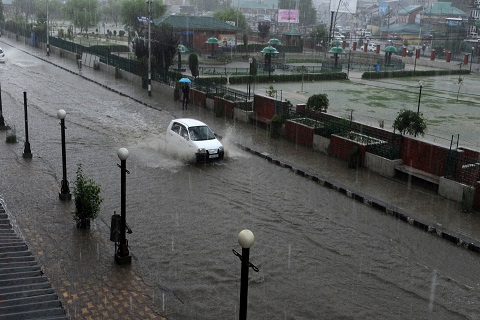 Srinagar, Aug 01: Jammu and Kashmir has received above eight percent normal rainfall while Srinagar, the summer capital has experienced over 88 per cent large excess precipitation in the ongoing season.

It added that four districts of J&K including Anantnag, Kulgam, Doda and Poonch received excess rainfall against the normal where 184.3mm, 192.1mm, 236.2mm and 346mm rainfall was respectively recorded during June 01-July 20, 2022.

The three districts including Bandipora, Ganderbal and Udhampur have received normal rainfall at 87.4mm, 101.3mm and 324.3mm respectively.

However, the rains frequently lashed Jammu and Kashmir parts in the last over one week while many areas witnessed flash floods as well.

An official in the MeT said that the fresh data about the precipitation till August is being prepared.kno