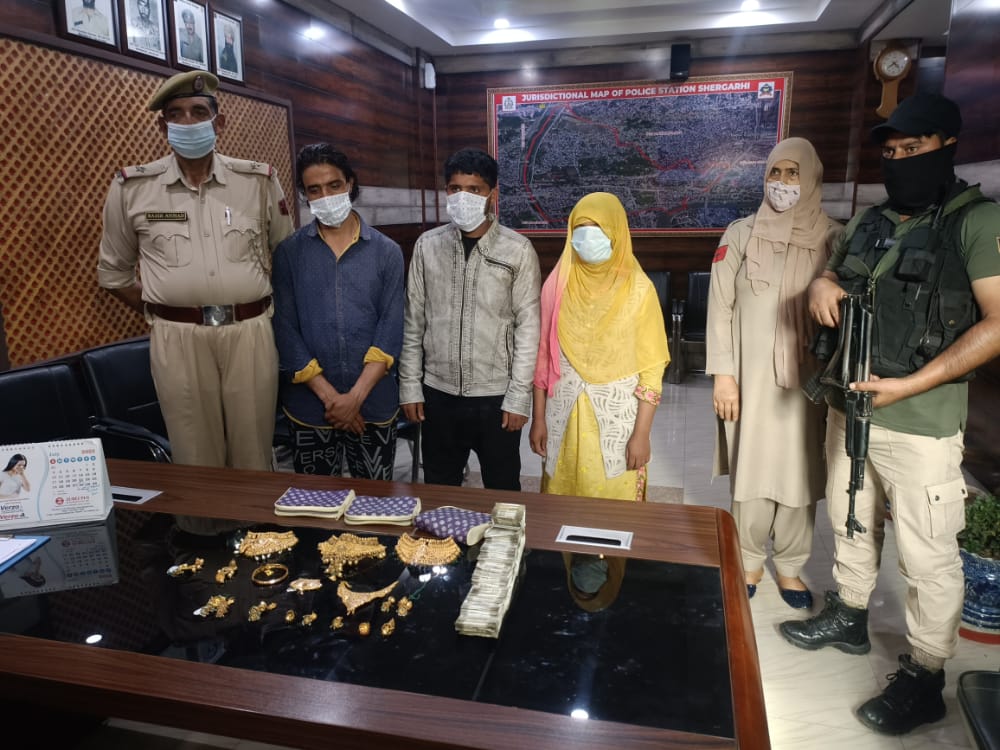 Srinagar, 30 July: Police on Saturday said that they have arrested three thieves including a lady with recovery of stolen Gold and cash in Srinagar.

In a handout,  the police said that today Police Station Shergarhi received a complaint from Kartik Sardar son of Sitaram Sardar resident of Hogli Kolkata West Bengal, working as a goldsmith at Sarai Payeen Srinagar to the effect that during the intervening night of 26/27-07-2022 some unknown burglars entered into his jewellery workshop and stole gold Jewellery.

The statement further stated that upon the receipt of this complaint case FIR No. 60/2022 U/S 457, 380 IPC was registered in Police Station Shergarhi and investigation was set into motion. After examining technical evidence and CCTV footage near the place of occurrence the accused person namely Tahir Ahmad Mir @ 90 sob of Sonaulllah Mir resident of Harden Siver Khurhama Lolab Kupwara was identified and after strenuous efforts within two days the said accused was arrested.

On his confession statement two more accused persons namely Jameela @ Jabeena wife of Tahir Ahmad Mir resident of Harden Siver Khurhama Lolab Kupwara, Irshad Hussain Yattoo son of Muhammad Akbar Yattoo resident of Sultanpora Pattan Baramullah involved in the instant case has been arrested. All the stolen property worth Rs. 650000/. in the instant case has been recovered from their possession. The details of stolen/recovered property are as three Golden Neck Collar, one Golden Neck less, one Golden Pandey, six Golden Earrings, one Bangle and Cash Rs. 1,10,500, they said.

The investigation of the instant case is going on and more recoveries are expected, reads the statement.