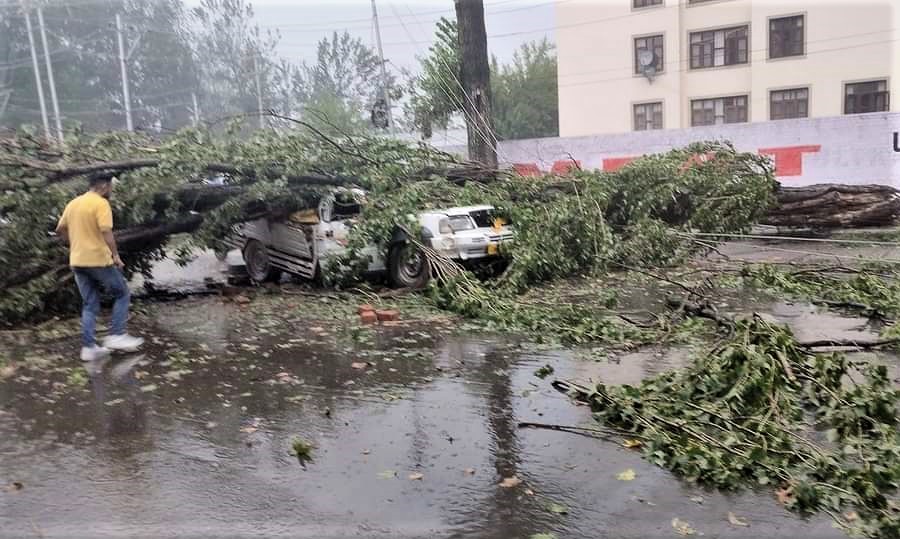 Srinagar, Jul 27: Two youth were injured, around a dozen residential houses and a wooden bridge got damaged after a heavy rainfall on Wednesday lashed plains as well as the higher reaches of Kashmir. The incessant rainfall also led to the disruption of electricity in Kashmir parts.

The heavy rainfall caused extensive damage to around one dozen residential houses in Rampora area of Chattabal.

“During the rainfall, the rooftop of our residential houses got damaged and the water entered into our houses,” the residents said, adding that they have no place to live; however, none from the administration visited them till late evening hours.

The heavy rainfall started at around 05:00PM and the reports were received from different areas that the branches of many trees fell during the rains.

Sources said that two youth were also injured after a branch of chinar tree fell on the vehicle they were travelling in  near Bemina Degree college here.

They said that the duo was taken to hospital for treatment.

He said that the flash floods led to overflow in a nearby stream during which a bridge got damaged.

“There has been no major damage to property or loss of life. Restoration measures have been initiated by the concerned departments. The situation is being monitored closely in the district,” officials said, advising people to take necessary precautions near the water bodies in view of the weather forecast of the expected rains.

Moreover, the incessant rainfall also damaged the electric poles and caused damage to the power infrastructure at many places due to which the electricity was snapped in many parts of Srinagar and areas of Kashmir.

Chief Engineer, Kashmir Power Distribution Corporation Limited (KPDCL), Bashir Ahmad Khan said that the electricity has been restored at many areas while at some areas the men and machinery has been pressed to complete the restoration process, which would take around two hours.

Director Meteorological department (MeT), Sonum Lotus told KNO that the cloudy weather conditions would continue in coming days and said there is possibility of more rains for next 24 hours.

“The cloudy weather would continue for the next 24 hours,” he said.kno