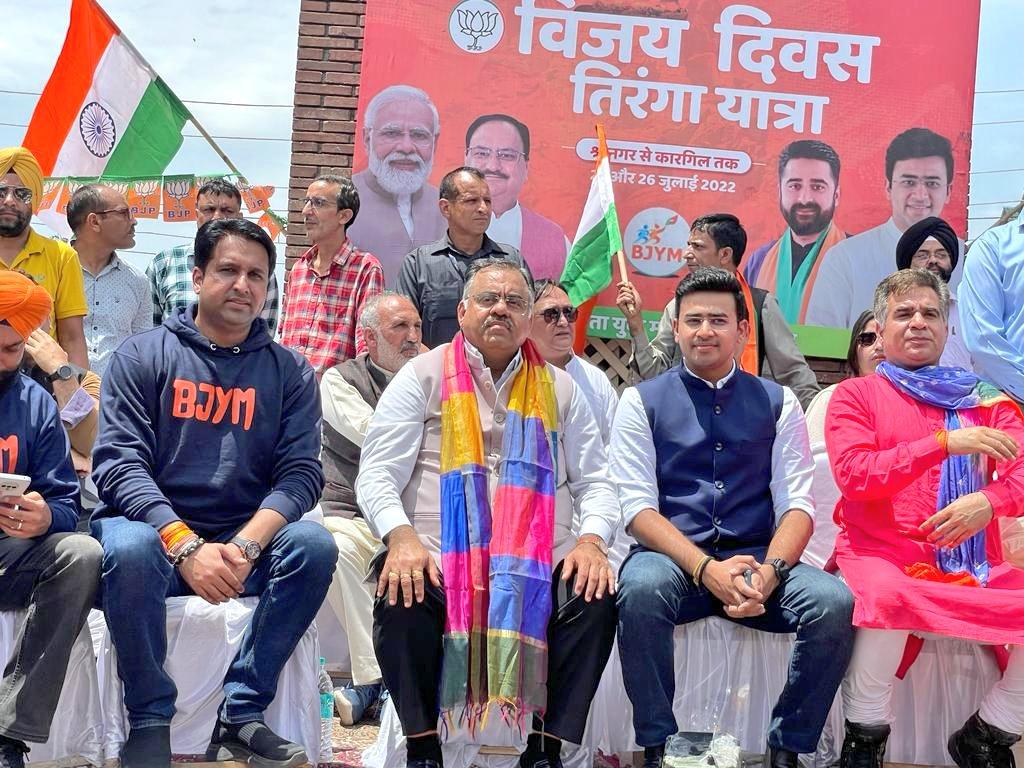 Srinagar, Jul 25: The first-ever Tiranga rally to Kargil was organized by Bharatiya Janata Party (BJP) at clock tower,  Lal Chowk in Srinagar in which 300 bikers participated.

The rally was flagged off by BJP General Secretary Tarun Chug. It will culuminate at Kargil War Memorial on July 26 on the occasion of Vijay Diwas. However, all the roads leading to Ganta Ghar were sealed by the authorities and the shops remained closed in the wake of the rally.

The participants belonged to BJP’s Yuva Morcha who had come from different places of the country.

Chug while addressing the gathering  said the twin families in Jammu and Kashmir, who ruled here for the past 70 years have made it terrorism capital, but the Prime Minister has made it tourism capital.

Targeting Abdullahs and Muftis, Chug said the twin families have failed to serve the people in the last 70 years and “the two families have made J&K terrorism capital while the Prime Minister Narendra Modi has made it tourism and progress capital.”

“Mehbooba Mufti had claimed that after abrogation of Article 370, no one will raise tricolor in J&K, let she visit Lal Chowk and see how everyone has been carrying the tricolor in their hands,” he said, adding that the twin families were claiming high and tall that the Article 370 cannot be abrogated, but the PM Modi has made it possible.

“The twin families have joined hands and come up with a Gupkar gang. Abdullah and sons & Mufti and sons are only making poisonous statements,” he said.

“Abdullah and sons, Mufti and sons & Nehru and sons have been rejected by the people now. The youth have come forward for the progress of J&K. The youth from different J&K parts participated in the bike rally,” he said.

“For those who have looted J&K failed to ensure progress here, but their properties continue to rise,” he said, adding that the tricolor is in the hearts and minds of every Kashmiri, but these politicians are reluctant to accept this fact.

About the rally, he said that the rally is being organized to remember the sacrifices of the Kargil war. “J&K has moved forward and cannot move ahead as per the aspirations of the dynasts,” he told reporters.

BJP’s J&K president, Ravinder Raina while addressing a gathering said that the tiranga is “our identity and it belongs to everyone irrespective of religion, caste and creed.”

“Many people have sacrificed their lives for India’s independence. Many officers have also been killed for this tricolor,” he said.

Sunil Sharma, former J&K minister said that BJP will have its own government in UT

National President of BJP Yuva Morcha, Tejasvi Surya also spoke on the occasion and said that for the first time after the abrogation of Article 370, such a rally was organized.kno