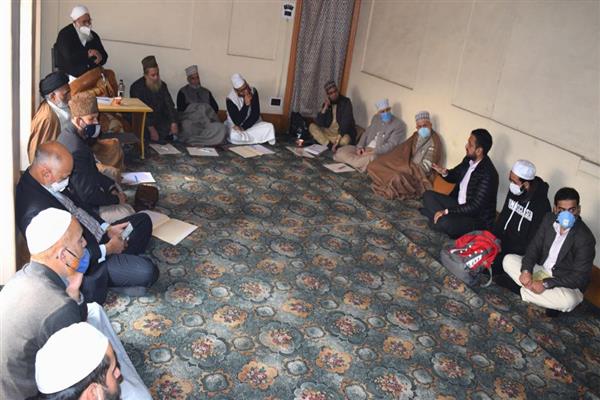 “The participants expressed strong reaction against the recent ‘negative activities’ of some individuals ‘aimed at creating sectarian divisions’ in Jammu and Kashmir”, reads a statement.

“The meeting rejected such actions and activities of accusations and counter-accusations between the two sects of Ahlus Sunnat Wal Jamaat in Kashmir, saying that Kashmir and its people cannot afford and allow such irresponsible attempts nor can any individual or party be allowed to commit insolence and misdemeanors of the great Muslim scholars”, reads the statement.

The participants, as per the statement, said that in the context of the current situation, the meeting and discussion among all the responsible scholars of all schools of thought was inevitable and the need of the hour.

“The MMU proposed that the Majlis-e-Ulema shall convene a consultative meeting on Thursday, 28 July 2022, during which a common action plan and strategy shall be compiled, and the scholars and preachers of all schools of thought would be bound to strictly adhere to it”, reads the statement.

“The meeting stressed mutual unity and harmony in view of the serious local and external situation and appealed to the people to keep an eye on the activities of anti-Islam and anti-unity elements and to be vigilant against their negative activities”, it reads further.