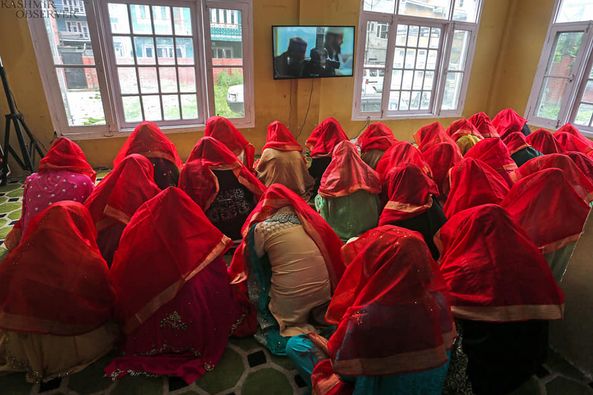 Srinagar, Jul 21): In a mass marriage ceremony, at least 51 couples from different areas of Kashmir tied a nuptial knot in Srinagar on Thursday.

The mass marriage ceremony was organised by the NGO—“We the Helping Hand Foundation” which has already solemnized a series of such ceremonies in the last few years.

“We have already borne the marriage expenses of over 400 poor girls and expect to continue to organize more mass marriage ceremonies in future,” said Umar Wani, the Chairman of the NGO.

Wani said that the main aim behind organising mass marriage is to promote austerity and simplicity during Nikkah and to help poor, orphan girls to get married who are overage now but unmarried due to social customs like dowry and gold demands.

He further added that they neither disclose the names of the girls who are getting married in mass marriage function nor do they allow anybody to capture photos of the brides. “Besides that no male is allowed to enter the rooms where these brides stay,” Wani said, adding that “many rituals have become a headache for underprivileged people and in order to help them with the help of public donations, these poor girls register themselves with the organization, and after verifying their credentials and other details, the NGO starts arrangements for their marriage.”

Wani said that they are also trying to unite the whole Ummah as they are inviting scholars and Muftis of all schools of faith who deliver nikkah ceremonies.

He further added rich people have to play an important role in promoting simple nikkah as they should first see whether their neighbours have been able to marry their wards and if all will perform nikkah simply, then everyone can get rid of this headache.