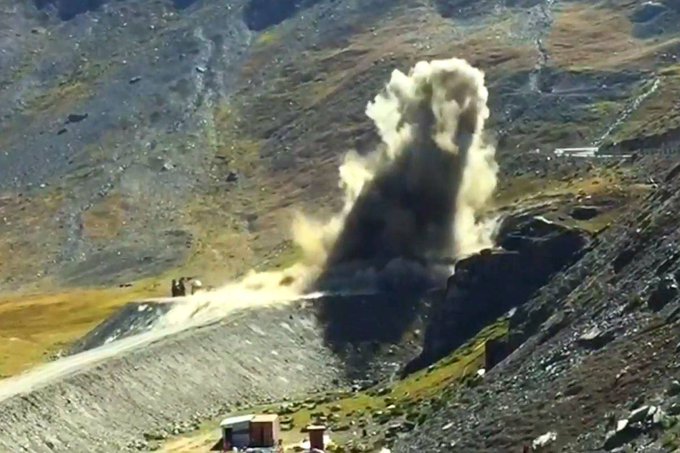 Ganderbal, Jul 06: The work on the much-hyped Zojila tunnel is in full swing as out of 18 kilometres, work on 8.5 kilometres has been completed so far, officials said here on Wednesday.

Officials said that the tunnel is envisaged to provide all-weather connectivity to Ladakh and the National Highways and Infrastructure Development Corporation (NHIDCL) has paced up the work to ensure its timely completion.

Senior Manager Projects, Burhan Andrabi said that of the total 18 kilometres, work on 8.5 kilometres of the tunnel has been completed, besides, two bridges and sub- structure has also been completed.

The work on the tunnel was started in the year 2018. The highway will have two twin-tube tunnels, 5 bridges, and 2 snow galleries.

Burhan said the second part is building the 14.15 kilometre Zojila tunnel itself, which will be 9.5 m wide, 7.57 m high with 2 lanes in shape of a horseshoe.

He added that in addition, a 2,350 metre concrete ‘cut and cover’ tunnel will be built, along with 3 ventilation caverns or shafts.

“Works also include construction of portals, control buildings, ventilation buildings and muck disposables along the route.”

With the construction of the tunnel, distance from Baltal to Minamarg will come down to 13 kilometres from the present 40 km and travel time is expected to be cut by an hour and a half.

The project is expected to lead to integrated development of both the UTs.

The tunnel will provide all-weather connectivity between Ladakh and Kashmir, which is otherwise hampered during winters as Zojila pass is covered in snow and avalanches during winters,kno