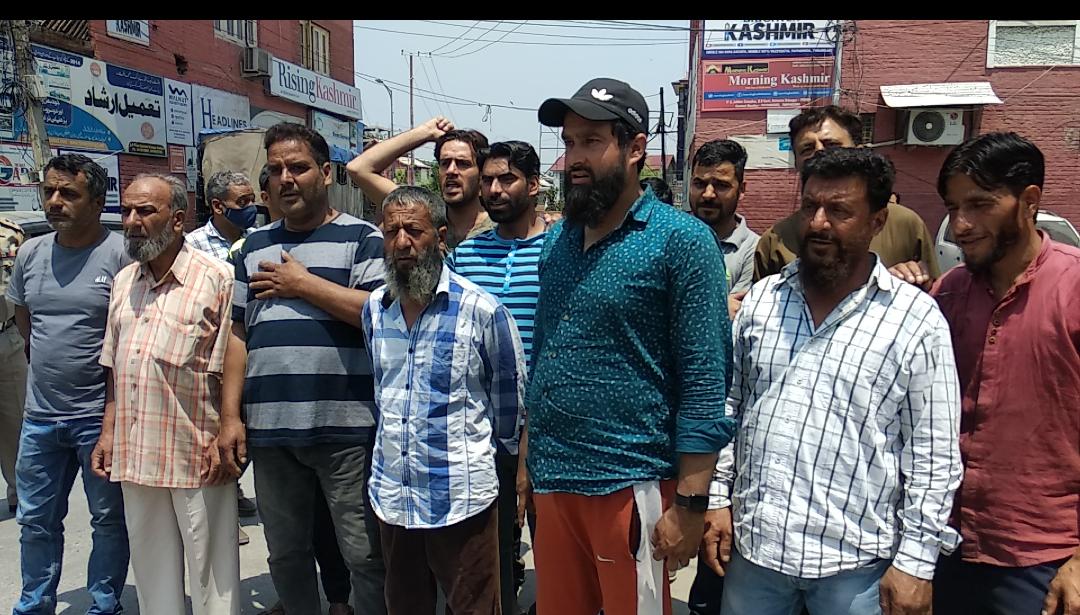 Srinagar, June 29: Scores of shopkeepers Wednesday appealed to LG Government to reconsider their decision of closed down their shops in Pantha Chowk area of Srinagar outskirts till the end of Shri Amarnath Yatra.

Shopkeepers mostly dealing with spare parts business assembled in Press Enclave Srinagar and registered a protest against the decision to bar them from opening shops in wake of Shri Amarnath Yatra.

The 43-day pilgrimage to the cave shrine will begin from twin base camps in Kashmir on Thursday (June 30) and will conclude on August 11.

“We have been directed to close our shops for 40 days. It is injustice. Our families will starve. We are already economically weak,” one of the protesting shopkeepers Suhail Ahmed said.

The protesting shopkeepers said that the route that Yatris will use is far away from their shops and yet they are being barred to open their shops.

“There are at least 60 shops that have been closed down. We knocked the doors of every official, but nobody listened to us,” they said and requested LG Manoj Sinha to intervene in the matter.

Police statement : No shops closed at Panthachowk except dozen or more mechanical/ scrap ones

Police said that no shops except a “dozen or more” mechanical and scrap shops inside yatra camp campus are closed in Panthachowk area of Srinagar.

“Clarification: There is story going in certain groups that shops are closed in Panthachowk, it is clarified that all shops are completely open in whole of Srinagar district including in Panthachowk, except about a dozen or more mechanical/scrap shops inside yatra camp campus,” a police spokesperson said in a statement.

“These shops owners were asked to get verification done and operate the shops, but instead of doing this they opted to protest under influence of some vested interests,” the police said, adding, “Media houses are kindly requested to get confirmation from Administration before doing sweeping stories on such sensitive matters during yatra period which can be used by subversive elements to peddle fake narratives: SSP Srinagar”. (KNT)