Two militants held along with arms, ammo in Pattan: Officials 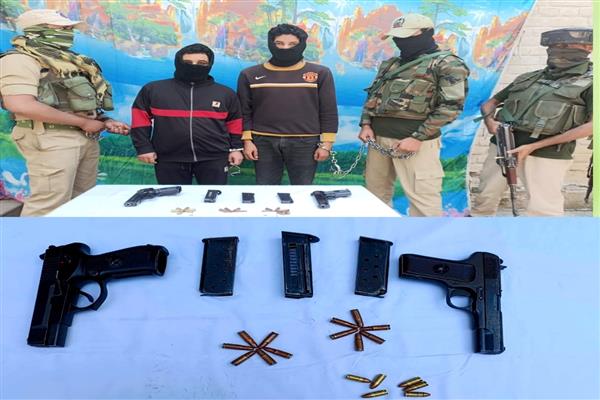 According to a statement, one youth identfied as Irshad Mir of Nehalpora, Pattan was reported missing on 09 May 2022 and during investigation it surfaced that he had joined militant ranks through a module of LeT.

The statement reads that this was followed by another youth named Zahid Bashir, also from Nehalpora, Pattan who went missing on 20 May 2022 and it came to fore that he had been lured by militants to join them.

“The investigation into the case established that the youths had joined LeT outfit. Inputs further revealed that the duo was tasked to operate in general area Pattan for targeting vulnerable soft targets and PRI members / minority community,” it added.

It further reads that on 10 June 2022, specific intel was received regarding the movement of these two militants in general area of Ghat Palhallan and accordingly joint teams of Baramulla Police & 29 RR laid an ambush in the evening hours and succeeded in apprehending them.

“They have been identified as Irshad Ahmad Mir (23) son of Ab. Rehman Mir and Zahid Bashir (18) son of Bashir Ahmad—both residents of Nehalpora, Pattan.”

As per the statement two Chinese Pistols with 18 live rounds and 3 magazines were recovered from their possession and same have been seized.