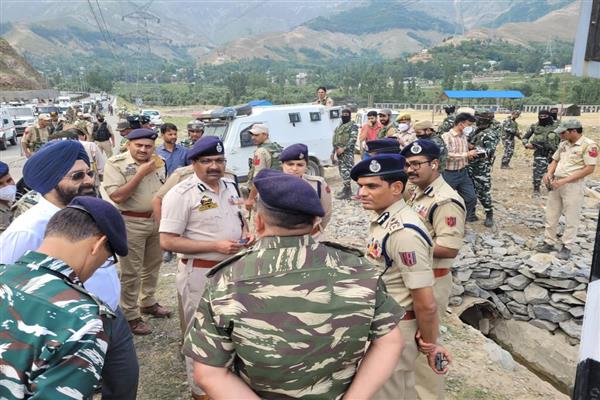 The DGP emphasised for increased coordination and communication among the forces for quick response to the requirements for the security and assistance of yatris. The DGP emphasised for greater synergy to ensure a smooth and secure pilgrimage.The security grid needs to be strengthened and all important locations en route be kept under continuous surveillance round the clock, the DGP directed.

He said that all important places including the ‘langars’ (community kitchens), parking places should be brought under security cover and stressed for sharing the inputs among the agencies for preventive measures. The DGP directed for area domination and joint patrolling of forces along the NHW.

During the meeting, the DGP took stock of security preparedness at upcoming yatra niwas and en-route national highway in the district for the forthcoming Shri Amarnath Ji Yatra. Interacting with the officers the DGP emphasized that local & highway security grids need to be kept fully geared up at all levels and joint efforts of all security forces must continue to conduct smoothly the pilgrimage of SANJY. He reviewed the additional security measures being taken at the National Highway. He also discussed the traffic management on the National Highway.

The senior officers from JKP & CRPF briefed the DGP about the deployment plan and other necessary arrangements put in place for smooth conduct of Shri Amarnath Yatra.