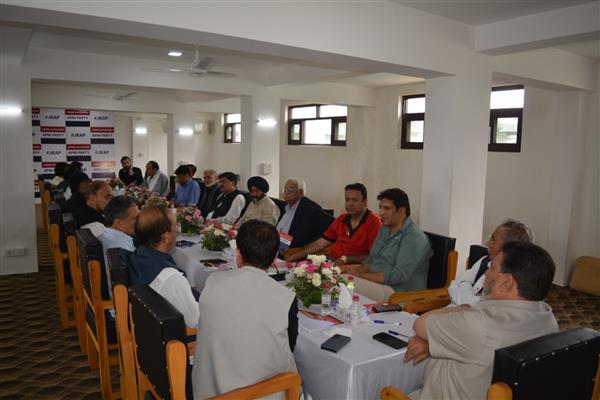 Srinagar, June 1: J&K Apni Party leadership held a meeting over the prevailing political situation. The meeting was presided by Party President Syed Mohammad Altaf Bukhari. During the meeting, threadbare discussion was held on the political approach to be adopted in prevailing circumstances.

During the meeting a resolution was passed strongly condemning the innocent civilian killings. The Party urged the LG led government to safeguard the interests of the members of minority and create a conducive and peaceful atmosphere.

In the meeting, emphasis was also laid on the participation of party‘s youth wing in various pro-people programmes. Participation of the youth in political affairs will embolden their voice and it is imperative for empowerment of the youth, said Syed Mohammad Altaf Bukhari.

In a prelude to strengthen the organisation at grassroots, party’s outreach calendar was also rolled out where in the District Presidents were directed to ensure wide participation of the people.

The Party also asked its cadre to bridge the gap between the people and the administration and gear up for upcoming Assembly polls, demanding that the polls should be held at an earliest.