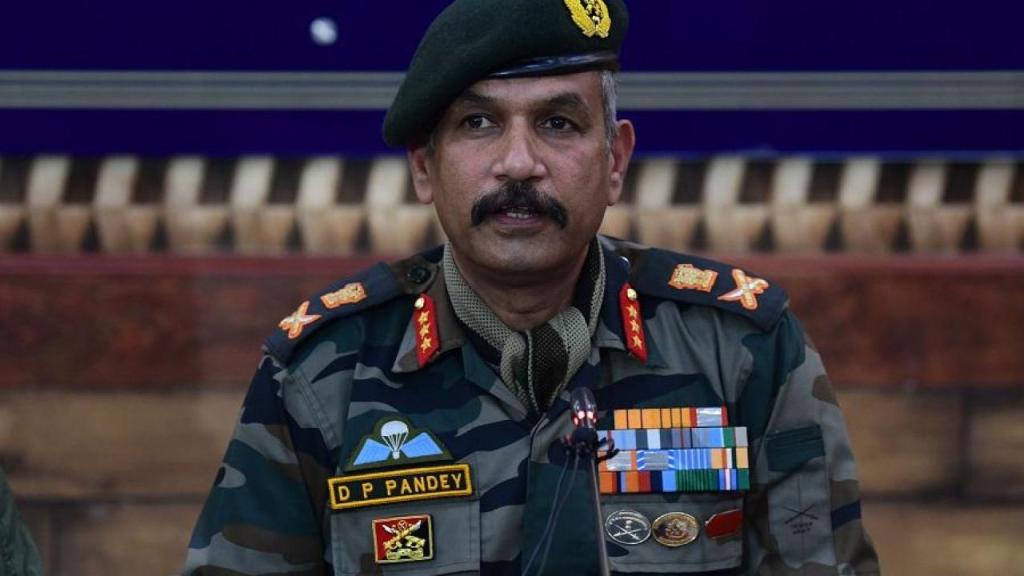 Srinagar, May 05: The outgoing General officer Commanding (GoC) of Srinagar-based army’s 15 Corps Lieutenant General D P Pandey Thursday said that he joined head of the 15 Corps with a “philosophy of breaking the cycle of violence in Kashmir in he succeeded to a large extent.”

He, however, was quick to add that he did nothing unique but continued what his predecessors did in the past. Talking to reporters at army’s 15 Corps headquarters in Srinagar, the GoC Pandey, said that a wrong terminology was being used like “Kashmir problem.”

“The fact remains that there was a problem in Kashmir which we along with the people and cross section of society have largely been able to overcome. Today, peace has started to become a permanent feature. Though some, rather very few people won’t be happy with the peaceful atmosphere and they will keep on trying new methods to disrupt it, but there will be always be joint counter measures to defeat such elements,” said the army officer, who is all set to join a new posting soon.

Replying to a query what were his achievements, GoC Pandey said that he joined as the head of 15 Corps with a  philosophy of breaking the cycle of violence in Kashmir. “Today, I can say that we succeeded. We have done well on this front,” he said.

The GoC Pandey said that he continued to do what his predecessor had been done and did nothing unique or new. “I believe my successor will be more competent than me,” he said.

The GoC said be it Rashtriya Riffles in the hinterland or the soldiers on the LoC, both were intimate party of the Kashmiri society. “Both faced challenges together and succeeded,” he said.

About the achievements, the army officer said that on one hand they kept killing militants while ensuring surrenders during live encounters and on the other, efforts were made to ensure youth are prevented from picking up arms.

“In last over a year, some 230 youth who had either joined militancy or were about to join, were brought back to live a peaceful life. This indeed is my achievement. Rest, carrying out operations against militants needs not to be counted,” GoC Pandey said.

He said today, Jammu and Kashmir police received more human intelligence than technical intelligence and militants including Over Ground Workers are being isolated none other than the society itself.

“My endeavor had been that no mother, sister or daughter should cry in pain for just somebody picking up arms and getting killed in encounters,” he said.

About American weapons including steel-piercing weapons making entry into Kashmir, GoC Pandey said that it was not a challenge as counter measures through drills and other measures were already put in place to meet such challenges. “Yes, some American weapons have entered Kashmir but its not a challenge anymore….,” he said. GoC Pandey while replying to a query, said Hybrid militants were a challenge some nine months ago, but not now. “It was difficult early to identify a government servant, a shopkeeper or a student aged 15 or 16 indulging in militant activities. But as of now, society is so vibrant and such people are being identified in a jiffy. Parents too are keeping a close watch on the children so that they don’t tread a wrong path,” he said.

On ceasefire pact and its benefits, he said it was never a challenge for the army but people on the either side of the fence used to suffer. “Today, people on the both sides of the border are living a peaceful life which is a good gesture,” he said.

The GoC said that there will always be threats to disrupt Amarnath Yatra, but security system and measures taken will always foil such plans. kno