Contractors stage protest in Sopore over new norms for renewal of cards, over issues like police clearances 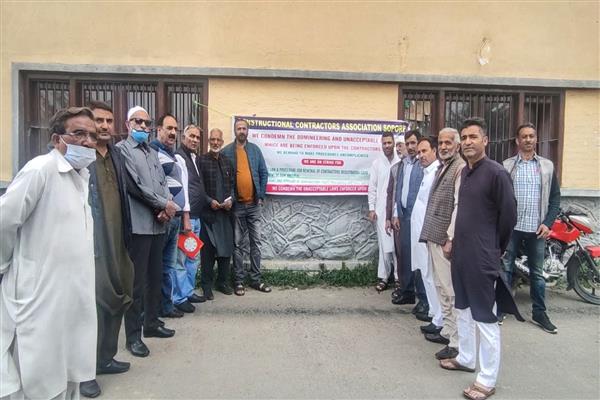 Sopore, Apr 19  : Contractors in Sopore town of Baramulla district on Tuesday staged a protest demonstration over new norms regarding renewal of cards of contractors and also demanded release of pending bills.

The protest call was given by the Jammu and Kashmir Contractors Coordination Committee over new norms for renewal of cards, besides number of issues including clearance from the Police.

Bashir Ahmed Sumji, one of the protesting contractors said that new norms are not acceptable to them and they will protest any such move that is only aimed at delaying the renewal of cards of contractors and putting them in great distress.

He urged the authorities to withdraw such unnecessary requirements and immediately renew cards of contractors.

Another contractor said that they have been left with no option but to come on roads to highlight their problems due to the non-seriousness of the government to release their pending bill.

Meanwhile, the protestors sought the intervention of Jammu and Kashmir LG Manoj Sinha into the matter. kns