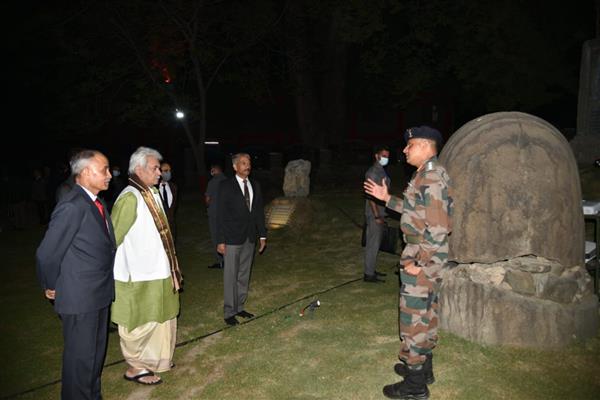 In a statement, a defence spokesperson said that this heritage conservation project hosts several excavated figurines in the form of two large monolithic rock Shivalingas, seven Gandhara style sculptures and a huge rock carving of the feet of a monolithic statue.

“From April to July 2021, the Chinar Corps diligently restored excavated sculptures, created a heritage park themed to display them and with technical assistance from SPS Museum, Srinagar recreated scaled replicas of seven more stone figurines excavated from the site in 1926,” reads the statement.

It reads that the event was presided over by the Lt Governor who appreciated the exemplary conservation work done by the Chinar Corps through the evident research, restoration and rejuvenation of ancient Pandrethan monolithic 6th Century rock statues at ‘Dharohar’, in all their ancient splendour.

He said that he was happy that the National Monuments Authority has recognised this effort of the Chinar Corps through the first ever award of a Citation to any agency undertaking heritage conservation across the Nation.

“Such priceless legacy is integral part of our living civilisational heritage, our cultural and historical traditions. Chinar Corps deserves praise for the first initiative of this kind,” he said.