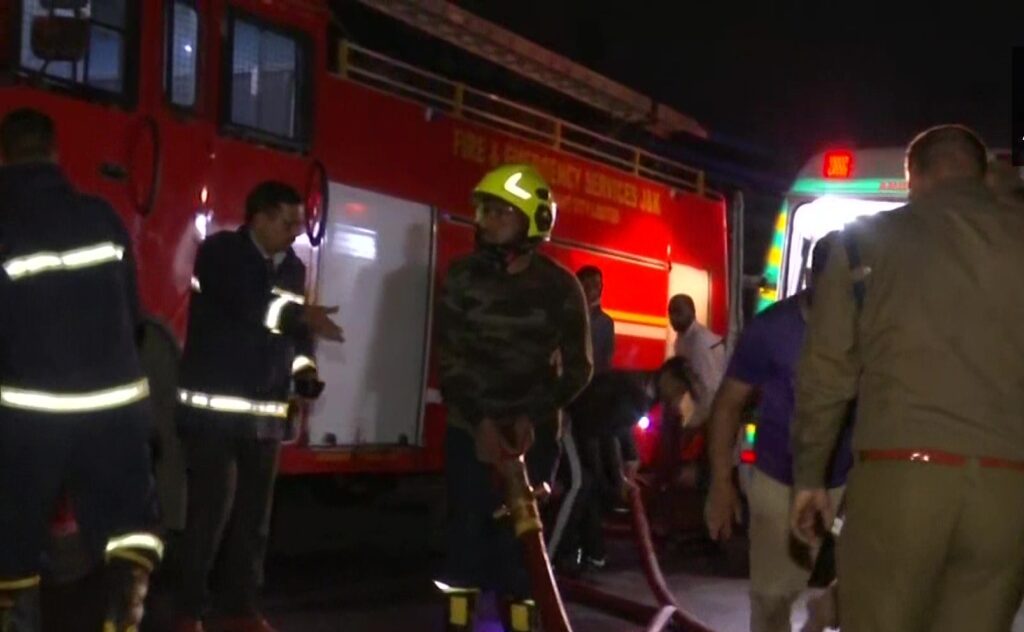 Jammu, Mar 14: Four persons were charred to death and at least 15 others suffered injuries after a massive fire broke out inside a scrap shop with some Juggis (shanties) in the vicinity at residency road Jammu on Monday.

Reports said that the fire broke in the evening and at least four persons were killed, three of them charred alive at the spot and one person succumbed to very serious burn injuries while several persons were rescued in injured condition by the locals who rushed to the area as soon as flames started to emerge.

SSP Jammu Chandan Kohli said fire broke out in a scrap shop located in the Residency road area of Jammu this evening.

“Short circuit in electricity wiring is suspected to be the cause of fire breakout in initial state. In the incident, fire flames engulfed the entire building and some LPG cylinders lying inside also exploded,” he said, adding, “15 persons sustained injuries in the incident who all have been evacuated from the site with hectic efforts of police, fire and emergency services assisted by locals.” He said all injured are under treatment in the local hospital.

“Unfortunately, four people have so far lost their lives in this tragic incident,” he added.

Meanwhile, Lieutenant Governor Manoj Sinha expressed grief and announced Rs 5 lakh each in favour the families of the deceased persons.

“Deeply saddened by the loss of lives due to LPG cylinder blast at a scrap shop in Jammu. My condolences to the bereaved families & prayers for speedy recovery of the injured,” he said in a tweet, adding, “Directed the district administration to provide all the necessary assistance.”