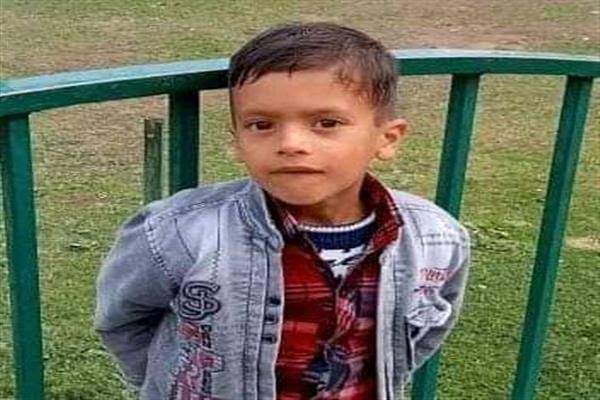 Kupwara, Feb 21 : Where did the missing 7-year-old Talib Hussain Khan, a resident of Awoora village of the frontier Kupwara district go?

This is what the worried family and common people of Awoora are asking these days as the minor went missing on February 15 and so far all efforts to trace him have failed.

As Talib went missing from his home on February 15, without wasting time, the administration has launched a massive search operation to find him. While the police have also set Rs 1 lakh reward for those who will inform  about the whereabouts of missing child to the police.

The family members of the Talib who has been missing for the last six days said that he had left home to play but didn’t return and since then. “We searched for him everywhere but we did not find him,” they said. “When we couldn’t find the child, we contacted the police, after which they joined us in searching for him, ” the family members of missing child said, adding that they are “begging everyone to help them trace out their son.”

“He is so innocent that he can’t even eat himself. I don’t understand where he went or who kidnapped him. Please let us know if anyone knows my son’s whereabouts,” missing minor’s mother, Masooda Bagem said  amid sobs.

With tears in her eyes, Masooda said that they are willing to give anything in return for her son’s whereabouts. “I can’t live without my son,” she said.

“Search operations are being carried out to find him,” he said, adding that the police are also conducting searches in water bodies. Besides the kidnapping angle is being looked at, however, the place has not yet reached a concrete conclusion,” he said

Meanwhile, the army had said that it continued extensive searches to trace the Talib, but could not get any clue about him as team comprising one officer, 03 JCOs and 51 RR searched following areas like Reshwari, Gorhi Nallah, Pt 1957, Nayem Shah Zyarat, Gujjar Patti, Mir Muqam, Frasduban Forest, Joda Talab, Khan Mohalla and Awoora village.

It further said, no traces of the missing kid were found. “Earlier also, 160 TA and 41 RR have been following this case and have already conducted searches with tracker dogs and drones,” the army said.

Furthermore, the former Rajya Sabha member and senior PC leader, Mir Mohammad Fayaz had also announced a reward of Rs 2 lakh for those who give any information about the missing Talib.

“I feel & share the pain of this missing child. In this time of distress, apart from District Police Kupwara reward, I, hereby, announce an additional amount of Rs 2 lacs from my side, if anyone gives information about his whereabouts,” Fayaz Mir Tweeted. kno