7 arrested including 4 Al-Badr Militants, and their 3 Associates in Rafiabad: Police 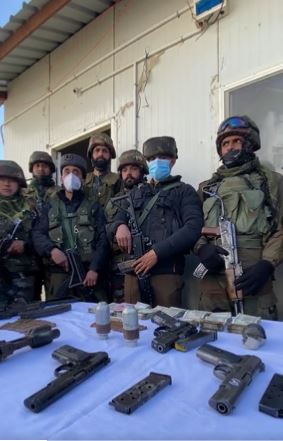 Sopore, Feb 12: Four militants and three of their associates were arrested in Rafiabad area of north Kashmir’s Baramulla district, police claimed on Saturday.

“On receiving a specific information that Al-Badr militant outfit is planning to carry out attacks on security forces in Sopore at several places, a joint CASO (cordon-and-serach operation) by Police, (army’s) 32 RR and 92 battalion of CRPF was launched at Rawoocha Rafiabad,” a police spokesperson said in a statement.

“During search operation 3 uncategorised militant were arrested along with incriminating material including arms and ammunitions,” he said.

“During questioning, they revealed that they are working from last 2 years for Al -Badr on directions of their handlers alias Yousuf Balousi of Pakistan and Khursheed of Anantnag at present Pakistan,” he said, adding, “They were given task to revive militancy in Rafiabad Sopore, recruitment of youth in Al – Badr tanzeem (outfit), providing logistics support to (militants), procurement and arranging weapons for new recruits etc.”

Further on their disclosure, the spokesperson said, another uncategorised militant Ashraf Nazir Bhat son of late Nazir Ahmed Bhat along with three associates namely Mohammad Ashraf Malik son of Mohammad Akbar Malik of Drungsoo, Mohammadd Afzal Thokar son of Abdul Aziz Thokar of Kalamabad Mawar Handwara and Shabir Ahmed Shah son of Ghulam Hassan Shah of Sherhama Mawar Handwara were arrested. “Incriminating materials including arms and ammunition, huge amount of cash, and other war like material were also recovered from their possession,” the spokesperson said, adding, “a case (FIR NO. 14/2022) under relevant sections of law has been registered in police station Dangiwacha, and further investigation is in progress.”