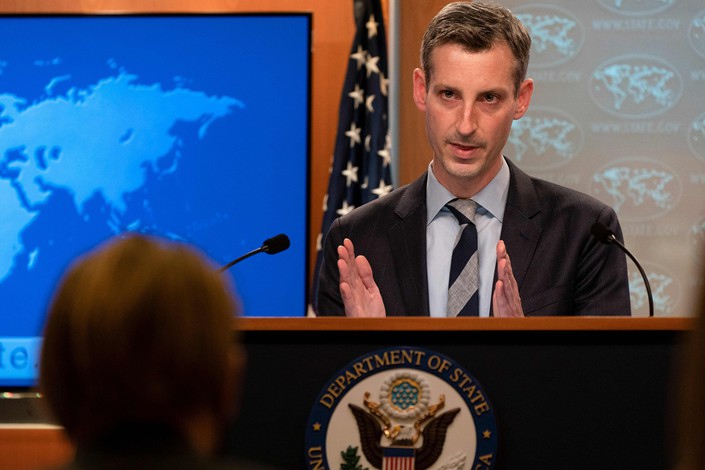 WASHINGTON: For the first time in years, the United States emphasised its strategic partnership with Pakistan, clarifying that Islamabad does not need to strain its relations with China to maintain ties with Washington, Dawn reported.

The US-Pakistan relationship came up for discussion at a State Department briefing on Wednesday afternoon when a journalist referred to a recent statement by Indian opposition leader Rahul Gandhi who blamed the BJP government in India for pushing Pakistan into the Chinese camp.

“Does the State Department agree with Mr Gandhi’s assessment?” the journalist asked.

The department’s spokesperson Ned Price, however, refused to get involved in an Indian parliamentary debate, saying: “I will leave it to the Pakistanis and China to speak to their relationship. I certainly would not endorse those remarks.”

“Why do you think Pakistan is working so closely with China? Do you think they feel abandoned by the US?” the journalist asked again. This question, however, received a comprehensive response from the US official.

“We’ve made the point all along that it is not a requirement for any country around the world to choose between the United States and China,” Mr Price said. “It is our intention to provide choices to countries when it comes to what the relationship with the United States looks like.”

The US official explained that partnership with the United States brings a series of advantages that China could not offer.

“Partnership may be the wrong term. The sorts of relationships that China has sought to have around the world do not (include those) typical advantages” that the United States offered, he added.

Pakistan was a close US ally during the cold war that began in the sixties and remained so till the collapse of the former Soviet Union. Pakistan played a key role in the war against the Soviets in Afghanistan and partnered with the United States in the war against terrorism as well.

The relationship soured when Al Qaeda leader Osama bin Laden was found in Abbottabad and the Obama administration took him out without informing Pakistan. Their relationship has remained strained since then, although bilateral consultations, even high-level visits by Pakistani rulers to Washington, have continued.

In July 2019, Prime Minister Imran Khan made an “official working” visit to Washington where he met the then president Donald Trump at the White House. He had another meeting with Mr Trump in New York during the UN General Assembly in September 2019.

Since then, there has been no face-to-face meeting between the leaders of the two countries and the current US President Joe Biden is yet to make a courtesy call to the Pakistani prime minister.

Despite these tensions, the relationship has continued, minus the fanfare of a summit. Pakistan extended full support to both the Trump and Biden administrations during their talks with the Taliban and facilitated the evacuation of US personnel from Afghanistan after the Taliban captured Kabul in August last year.

In recent years, China has emerged as the key factor in US foreign policies as Washington seeks to contain Beijing’s growing influence.

US policy makers see India as a key player in containing China’s influence and in their efforts to please India, they often ignore Pakistan’s interests, even on issues like Kashmir.

The United States, however, still recognises Kashmir as a disputed territory and not as an integral part of India, as New Delhi desires.

Some recent developments — such as India’s decision to abstain from a UN Security Council vote on Ukraine and a missile deal with Russia — apparently have also softened the US attitude towards Pakistan. (Dawn)