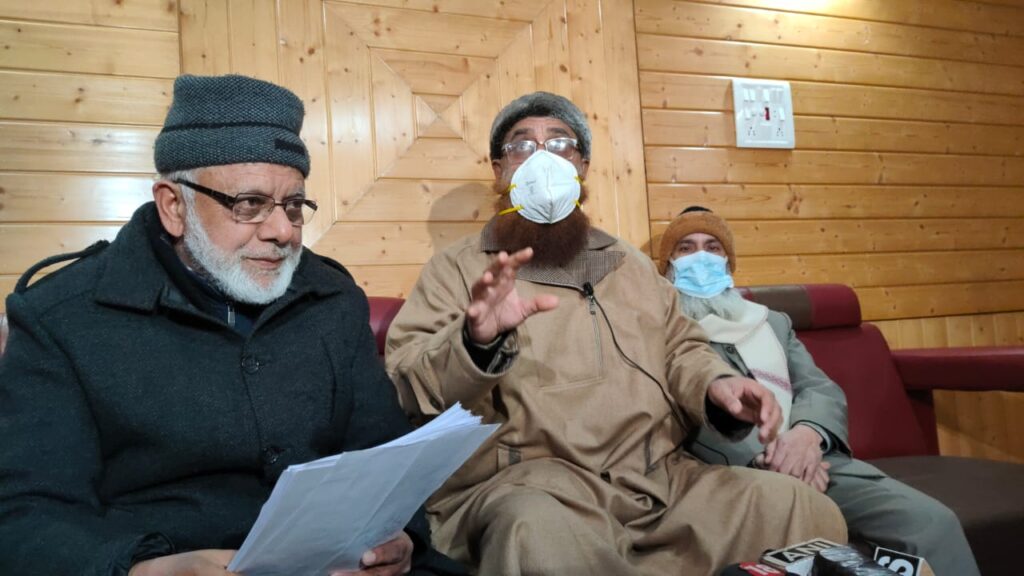 Srinagar, Feb 02: Former president of banned Jamaat-e-Islami (JeI) J&K, Dr Abdul Hameed Fayaz Wednesday said the Jamaat refutes allegations levelled in Dis InfoLab Report that the organisation and its associate members were involved in the conduct or promotion of the Conference held in Bosnia on Kashmir.

Addressing a press conference here, Dr Fayaz, who was flanked by former JeI spokesman Advocate Zahid Ali said that the allegations being circulated on social networks particularly reported by an entity named Dis information  that Jamaat e Islami Jammu and Kashmir (presently banned) and its associated organizations were involved in the conduct or promotion of any conference in Bosnia are totally baseless as the Jamaat is not functional due to ban and it has no associate organizations anywhere in the world nor any representatives.

“Any organization or individual claiming to be an associate organization or representative of the Jamaat is quite against the facts and is hereby challenged. The Jamaat was restricted to the territory of Jammu and Kashmir only and its activities too were restricted thereto and after it was banned in February, 2019, it stopped all its activities and functions. Some names shown in the report have attended in the conference have no nexus or association with the Jamaat,” Dr Fayaz said .

He said that ‘it is hereby clarified that neither the Jamaat nor any of its members was involved in the conduct or promotion of the said conference’.

“It is also hereby made amply clear that any member migrating to any place outside the territorial jurisdiction of Jammu and Kashmir ceases to be a member of the Jamaat as per the party constitution. So any person residing permanently outside Jammu and Kashmir cannot claim to be a member of the Jamaat and the organization cannot be held responsible for any activities done by such persons as any person settled abroad cannot have the membership of the Jamaat,” Dr Fayaz said, adding that “Nobody has taken any verbal or written consent from any erstwhile leader or functionary of the Jamaat to speak in any conference and at present due to the ban, it is quite out of question to get such consent.”

He said that so all queries raised about the participation of Jamaat-e-Islami Jammu and Kashmir in the conference Russell Tribunal on Kashmir held at Sarajevo Bosnia openly or tacitly are not justified at all. “Jamaat before the ban was a socio- religious organisation working for the betterment of the humanity at large in accordance with the divine guidance of Islam for seeking the pleasure of Allah,” he said. He, however, refused to take any questions.

Pertinently, on March 2, 2019, the Centre announced ban on Jamaat-e-Islami Jammu and Kashmir for a period of five years citing reasons that the outfit was in “close touch” with militant outfits. The Jamaat-e-Islami was banned under “anti-terror laws” as the Centre had claimed the step was taken to prevent any “escalation of secessionist movement” in J&K.