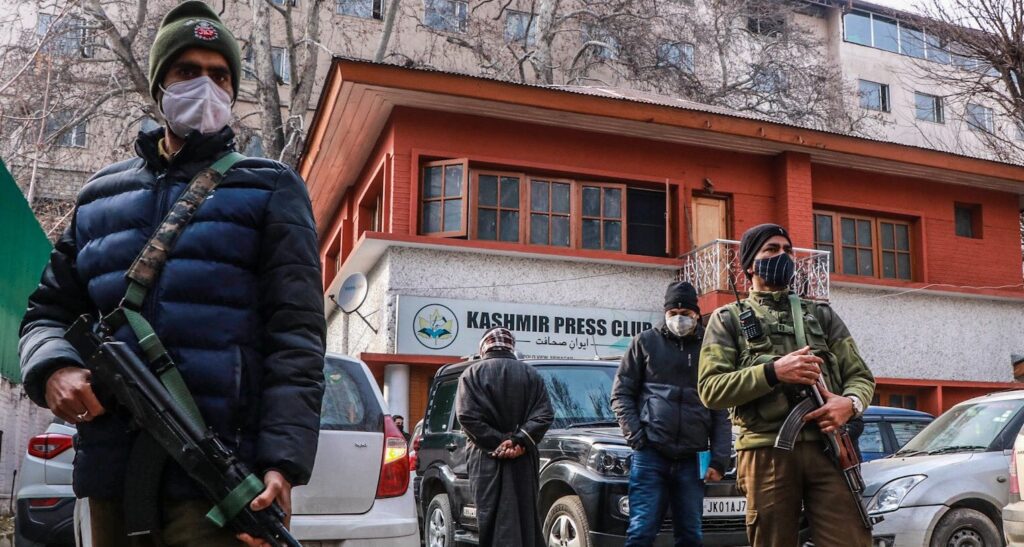 Srinagar, Jan 16: Several journalists’ bodies have on Sunday condemned the “forcible takeover” of the Kashmir Press Club, which was taken over on Saturday, January 15, allegedly by a group of journalists and newspaper owners who were escorted by armed forces.

Reacting sharply to the development, Editors Guild of India expressed its concern “at the manner in which the office and the management of Kashmir Press Club, the largest journalists’ association in the Valley, was forcibly taken over by a group of journalists with the help of armed policemen on January 15, 2022.”

“The Guild is equally alarmed by an arbitrary order of putting the registration of the Kashmir Press Club “in abeyance”, a day before this armed takeover of the Club, on January 14, 2022, by the Registrar of Societies. The Club had been issued a fresh “re-registration” as recently as December 29, 2021 following a long process of verification of an application made by them in May 2021, in response to public notices issued by the Registrar”, reads a statement.

“The Club was under an interim management after the ‘re-registration’, and had on January 13, 2022 announced an election date of February 15, 2022, to elect a new management body as well as the executive committee. The armed takeover has effectively scuttled this rule based functioning of the Club. Even more disturbingly, the state police entered the premises without any due warrant or paperwork, and have therefore been brazenly complicit in this coup, in which a group of people have become self-declared management of the Club.”’

“This violation of the sanctity of the club by the police and the local administration is a manifestation of the continuing trend to smother press freedom in the state. Just recently, Sajad Gul, a young journalist was arrested for merely posting a video on social media, which showed a family protesting against the Indian government”, the Guild remarked.

“Editors Guild demands immediate restoration of the status quo before this hostile takeover, announcement of elections to appoint a new management body and executive council, and strict prohibitions on any armed forces from interfering with the functioning of the Club, without due legal sanction. The Guild further demands an independent inquiry as to how armed forces entered the Club premises”, the Guild statement further read.

The Mumbai Press Club in its statement asked for restoration of election process and registration of the ‘Club’ while asking the state ‘to stop inference in journalist bodies.

“The Mumbai Press Club condemns the forcible takeover of the Kashmir Press Club (KPC) from the legally elected management body in conjunction with security forces on Saturday. The MPC also deplores the Jammu & Kashmir administration scuttling the Club’s election process the previous day, Friday, 14th January, by ‘holding in abeyance’ the registration of the Kashmir Club, which is registered under the Societies Act, 1860”, reads the statement.

“The Kashmir Club had applied for re-registration in May last year. This was required by an April 2021 notification after the abrogation of Article 370 for J&K, and the region was converted into a union territory. After a long ‘verification’ process by the District Commissioner, on 29th December, last year, a Registration Certificate under the Societies Act was issued to the Kashmir Press Club. However, soon as the Club Managing Committee announced elections to the 300-strong body, on 13th January, the administration issued an Order on the 14th of January, stating that re-registration of the Kashmir Press Club “is hereby kept in abeyance till the receipt of the final report from Additional District Magistrate, Srinagar”, reads the statement.

‘This order effectively has put the entire 300-member journalist body in cold storage and negated the democratically called election process.’

“This being not enough, the next day, Saturday, 15th January, using the Covid lockdown announced for Srinagar, a group of journalists barged into the Press Club premises in the Polo View area and declared themselves to be an ‘interim’ body. The group who trespassed into the club premises were protected by the J&K Police. The KPC does not allow gun-bearing persons in the club premises. However, the J&K Police personnel installed themselves at the club’s gate and inside the club building. Significantly, the group that barged in and seized the club had lost the elections in 2019”, the statement reads.

‘This indeed beats the imagination of how the local administration and police had blessed the trespass and takeover of the Kashmir Club on 15th January by a rival group, a day after the local government had frozen the organization through ‘de-registration’ on 14th January.’

“The Kashmir Press Club went through a democratic process of elections in 2019 and has been representing the voice of independent journalism in the Kashmir Valley for some time. To dub those who are writing and reporting in a balanced manner as ‘and-national’ is a cause of concern, and to derail a legally registered body from holding its own election process smacks of autocracy and is a violation of the freedom of the press guaranteed under the Constitution, it reads adding the Mumbai Press Club demands that the registration of the Kashmir Press Club be restored and that its legally elected body be allowed to conduct its election freely and fairly without threats and sans the shadow of the gun”, the statement further reads.

In a statement, the Delhi Union of Journalists (DUJ) said it was dismayed at the “government move to close the Press Club of Kashmir.”

“Press Clubs everywhere are information hubs where journalists exchange information and views, enabling them to perform their jobs better. They are also places where journalists stop and rest between hectic deadlines, while they wait for the next interview, the next press briefing…..They are places to get an affordable meal and a drink and socialize with colleagues. Press Clubs therefore are invaluable for the profession. In Kashmir, where journalism is a tough, risky, dangerous profession, the Press Club has played a vital role,” read a statement, issued by DUJ.

“The authorities had renewed the licence of the Kashmir Press Club on December 29, 2021, after the issue had hung fire for months. Once the renewal notice was received the Press Club belatedly announced elections. Now the licence renewal has been suddenly cancelled, ostensibly because of an adverse CID report. This volte face is inexplicable”, the statement reads.

“It is singularly unfortunate that a division seems to have been created within journalists, with a small faction ‘taking over’ the Club when Srinagar was under a lockdown. Police and paramilitary personnel were deployed during this process. Several associations of Kashmir journalists have signed a joint statement objecting to this ‘takeover’ of the premises.”

“We also note that the arbitrary arrests, detentions and questioning of journalists in Kashmir continue unabated. On January 5, 2022 Sajad Gul, a trainee journalist with Kashmir Walla, was arrested for fomenting anti-government feelings. Last year Salman Shah and Suhail Dar were arrested for ‘breach of peace’. Journalist Aasif Sultan has been in jail since August 27, 2018 and awaits trial”, reads the statement.

“We call for greater democracy and freedom of the press in Kashmir today. We view the developments in the Kashmir Press Club as one more reprehensible attempt to intimidate journalists. We demand immediate restoration of the Club to the duly elected office bearers and a renewal of the license.There must be no government interference in the running of a journalists’ club”, reads the statement.

“The Kashmir Press Club (KPC) was witness to unfamiliar activities on Saturday when a few journalists accompanied by policemen reached there and claimed to be its “new management”, a move that came hours after the Jammu and Kashmir administration had put on hold its registration.”

“The policemen claimed to be Personal Security Officers of one of the journalists who released a statement to the media stating that “some journalist forums” had chosen them to be new office-bearers”, the statement reads.

“The journalists — M Saleem Pandit as president, Zufliqar Majid as general secretary and Arshad Rasool as treasurer — said in the statement that the previous elected body had served its tenure for a period of two years, which ended on July 14, 2021, and the elections were delayed for unknown reasons.”

“Now, therefore, on January 15, 2022 various journalist organisations across Kashmir Valley unanimously decided to form an interim body of three members with Pandit as president,” it said.

“The claims of the interim body were countered soon by a statement issued by around nine journalist bodies in Kashmir who denounced this forcible takeover of the KPC office with “open support from administration” and termed it “a wrong and dangerous precedent”, it reads.

The statement said all Kashmir-based journalists have expressed anguish over the illegal and arbitrary takeover of the KPC by some journalists with open support from the local administration.

“On January 15, the day when the administration had declared weekend lockdown in view of Covid surge, a group of journalists barged into the club office and forcibly took control of the club by keeping the office members hostage. A large number of police and paramilitary personnel were deployed beforehand for this highly condemnable and completely illegal move,” the joint statement said.

They said the administration, by allowing a few disgruntled elements to hoodwink the club constitution, bylaws and flout all norms of law, has set a wrong and dangerous precedent.

“On December 29, the club’s registration was issued following which it was decided to initiate the process of fresh elections, but all of a sudden, a group of journalists, including some non-members, approached the administration with a proposal for an “interim body” and subsequently the re-registration was kept in abeyance.”

“This move, in which a group of journalists self-appointed itself as an ‘interim body,’ is uncivil, illegal, unconstitutional and without any precedence. It has been taken at a time when the process of registration is still pending before the authorities,” it said.

They also appealed to the Press Council of India, Press Club of India, Federation of Press Clubs and Editors Guild of India to take a strong note of how the local administration is supporting lawlessness and throttling a democratic media body.