Family of Srinagar youth arrested by NIA stage protest, says he is innocent, seek his release 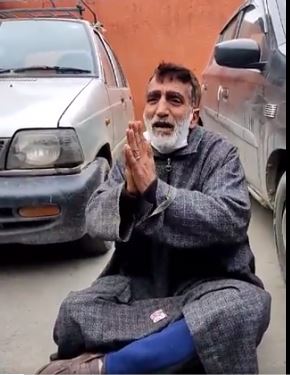 Srinagar, Jan 1: The family members of Arslan Feroz of Zaldagar area of Srinagar, who has been detained by the National Investigation Agency on Saturday held a protest at press enclave , demanding release of their son.

Talking to reporters at Press Enclave Srinagar, Arsalan’s sister appealed to DIG and IGP Kashmir to release his brother and do justice with his family.

While pleading for her brother’s innocence, she said that they will die without him. “He is studying in 12th standard but he was arrested by police during his board exams in the name of mobile phone checking. After that he is in jail for about one and half month and is not being allowed to appear in his board exams,” she added.

She also said that when the NIA raided their home, Arsalan was not present at home and his father called him back and asked him to co-operate with the agency.

Arsalan came to home and went to police station for questioning along with his father. “So why is police saying that he was arrested from his home when he was not present at his home at the time of the raid,” she questioned.

She said that Arsalan’s father is a heart patient and he cannot live without his son. “It is our appeal to the authorities to release him as he has not done anything wrong,” she said.

Family of Arsalan 19 year old youth from zaldagar, Srinagar protests against his arrest by NIA at Press colony.

Pertinently, NIA, day before yesterday issued a statement claiming that it has arrested a TRF/LeT operative.

“He is a 12th class student and we produced him before police ourselves. Earlier he had been arrested but was released after police found him innocent,” they said.

The family members appealed to LG and DGP to intervene and get Arsalan released. kns