Metro Rail Project in J&K to be approved by next week; LPG Gas Pipeline for J&K to be given a top priority, says Hardeep Singh Puri 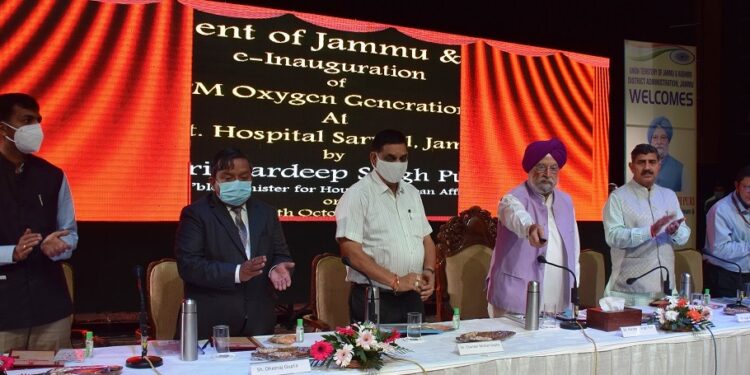 JAMMU, OCTOBER 14: As part of ongoing ‘Public Outreach Programme’ in J&K, Union Minister for Petroleum & Natural Gas and Housing & Urban Development, Shri Hardeep Singh Puri today said that Prime Minister Shri Narendra Modi’s Development Model emphasises that the benefits of every centrally sponsored scheme should reach directly to the beneficiaries be that of the Ujjwala Yojana, Ayushman Bharat, PM Awas Yojana or others. Shri Puri said this while e-inaugurating and laying e-foundation stones of many development projects of Jammu city at Convention Centre, Jammu.

Praising the Prime Minister for his steps taken vis-a-vis Swachhta Abhiyan in the country Hardeep Singh Puri said that the PM had emphasised from the ramparts of Red Fort in 2014 that it would be a great tribute to the Father of Nation if India becomes Open Defecation Free (ODF) on the 150th birth anniversary of Mahatma Gandhi. The Minister mentioned that the same is happening today when the country has achieved almost all the physical targets under ODF by constructing the individual household toilets, public toilets, community toilets and J&K is one among those ODF States/UTs which is a matter of pride for us.

Puri also said that the success behind implementation of Swachhta Abhiyan in almost every part of the country is that the programme was not restricted to only government quarters but was made a ‘Jan Andolan’ under PM  Narendra Modi.

The Minister also said that the Metro Rail Project in J&K will be approved by next week and the demand of LPG Gas pipeline for J&K will also be given a top priority by the Government.

Puri further said that there is no compromise on the development agenda and timelines are set before for the completion of projects like the deadline for Central Vista Project has been set which will be completed before 26th January, 2022. He also mentioned that the projects are being completed before their deadlines under the current government.

Saying that many schemes under the present government are reaching to their saturation points, the Minister said that under PM Ujjwala Yojana 1.0, eight crore LPG connections have been provided to the beneficiaries. He also said that timely implementation of all schemes has been stressed by this Government.

Jugal Kishore Sharma, Member of Parliament from Jammu said that after Sh. Narendra Modi took oath as the PM of India, many new schemes and programmes have been launched for the welfare of the people. He also said that a new dawn of development has been set in J&K after the abrogation of Article 370 which is evident from the fact that the benefits of schemes & programmes are reaching to its actual beneficiaries in J&K.