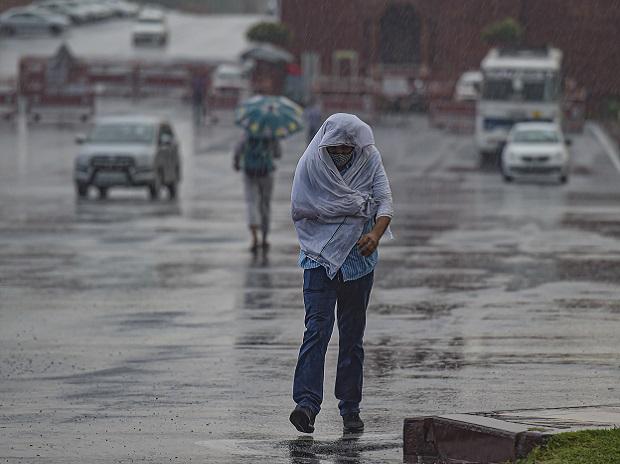 They said reports about snowfall were received from Kongdoori in Gulmarg , Zojila pass, Mawer Langate including Puthwari, Nowgam and Bangus, Sadnah-Top in Karnah, Z-Gali Machil (in Kupwara district) besides Razdan top in Bandipora. There are reports about the snowfall in Pir Panchal mountain Range, the officials said. However, they said that since there is no observatory of the MeT office, exact details of depth were not immediately known even as Razdan top is said to have accumulated around 1-ft snow leading the closure of the Bandipora- Gurez road. TosaMaidan in Khag area of central Kashmir Budgam district is also said to have received snowfall, they said.

A meteorological department official said that Srinagar received rainfall of 8.4mm in 24 hours till 0830 hours while the minimum temperature recorded at 9.8°C in the summer capital of J&K.

Qazigund, the gateway town of Kashmir, also received rain of 15.4mm and recorded a low of 8.4°C against normal of 6.3°C, the official said.

Pahalgam received 10.6mm of rain even as the famous resort in south Kashmir recorded a low of 6.7°C, he said.

Kokernag, also in south Kashmir, recorded 13.4mm of rain during the time and the mercury settled at 7.0°C, the official said.

Gulmarg, the world famous skiing resort in north Kashmir, received 26.0mm of rain and recorded a low of 1.5°C against normal of 4.7°C, the official said.

Jammu, the winter capital of J&K, had rainfall of 0.8mm, Banihal 15.8mm and Katra had highest downpour of 23.8mm in Jammu division and included 2cm of hail also, the official added.
Weatherman has predicted improvement in the conditions, saying “System is moving forward towards North West and can leave valley by afternoon.”

Nevertheless, for next 24 hours, the weatherman has forecast “isolated to scattered light rain/thundershowers over Jammu and Kashmir.”

For next couple of days, the MeT has predicted “isolated very light rain/TS to mainly dry weather.”

The weatherman had Sunday predicted possibility of light snow over higher reaches of Gulmarg, Gurez and Tulail area of Baramulla and Bandipora districts alongside with Sonamarg and Drass. gns