Annulling of Article 370 and 35-A increased miseries of common man manifold: Sadhotra 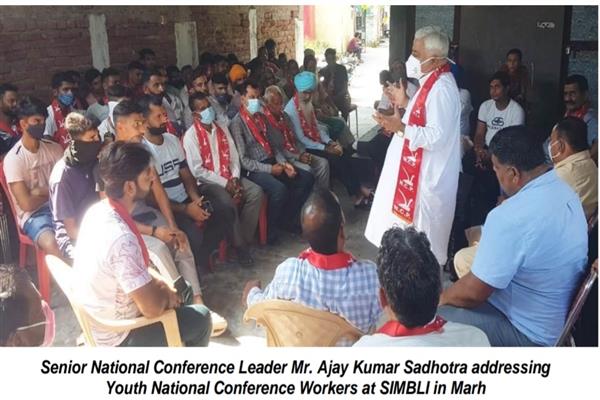 While addressing youth National Conference workers at SIMBLI in Marh. He added that Dr. Bhagwat Ji is in Jammu for four days, he must have also got feed back from his own people.

According to a statement, National Conference leader said that since the abrogation of Article 370 and 35-A, a feeling of Identity crisis, insecurity of Jobs and land has housed the minds and hearts of common man of Jammu and Kashmir especially Jammu. The people of Jammu and Kashmir especially Jammu are feeling that BJP has betrayed with their huge mandate.

Fast rise in unemployment has frustrated the youth. Youth feels disgusted, dischanted and helpless. And moreover, trade is also being snatched by the people other than the residents of Jammu and Kashmir. It has also made traders community disgusted as one after the other trade is being snatched by outsiders, said Mr. Sadhotra.

Senior National Conference leader asserted that timing of annulling Article 370 and 35-A in 2019 was not appropriate to push the agenda of Sangh Parivar to annul Article 370 and 35-A. It was time to jointly face the challenges of terrorism from across the border and challenges on China border. Peace is the foremost need of this region of our Country for sustainable development to make strong Nation. When we say India First then it should not be only lip service but in practical it should be, said Mr. Sadhotra.

It is first time in the political history of Jammu and Kashmir that all Parties and Leaders from both the regions are demanding full-fledged state before Assembly Elections as a matter of Confidence Building Measure. Our Central leadership should show magnanimity and give full Statehood to the people of J&K to instill trust.

Annulling of Article 370 and 35-A has created atmosphere of trust deficit unemployment and identity crisis for people of Jammu and Kashmir especially Jammu as more and more people are coming for employment, business and purchase of land in Jammu from outside.