Jammu comes to a halt on ‘shut call’ given by traders 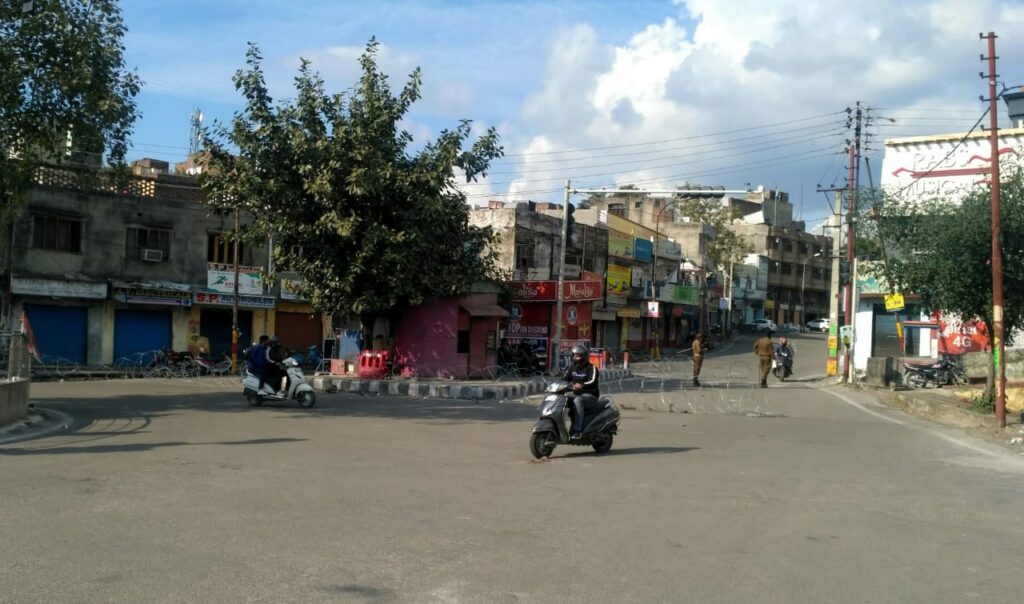 Jammu, Sept 22: Normal economical activities remain affected in Jammu due to traders bandh call against the proposed opening of 100 Reliance retail stores in Jammu, a claim which the company termed as false.

This was for the first time since abrogation of Article 370 on August 5, 2019, that Jammu observed a complete shutdown.

A complete shutdown is being observed in Jammu. The call was given by Chamber of Commerce and Industry which was supported by twenty-five trade and industry lobbies besides several political parties.

Several groups of traders under different banners staged a peaceful protest at their respective markets.

The protesters said that they are facing a wide range of issues that had been confronted by them after abrogation of state’s special status but the latest trigger is reports of Reliance retail setting up 100 stores in Jammu.

CCI, Jammu Arun Gupta said that the move is aimed at pressurizing the UT administration to stop torturing the Jammu traders in one way or other.

“We appealed to everyone to observe peaceful bandh against issues related to chamber and commerce. We are thankful that bandh gets an overwhelming response all over the province, even from the areas where we least expected,” said Arun Gupta.

Many political parties extended support of Chamber Bandh and I like to humbly appeal then to confine their protests within the issues raised by the traders,” Gupta said, apparently appealing political parties not to link traders   issues with abrogation of special status.

The Jammu transporters also joined the protests and said that it’s not for traders only but for every stake holder of Jammu.

Amid the ongoing protest over the purportedly proposed opening of the Reliance retail stores chain over the past many days, the company on Tuesday said the talk of 100 stores being opened by us (in Jammu) is completely untrue.

We have not opened any stores in Jammu. We have a few delivery points in the Union Territory of Jammu and Kashmir and these are set up by our delivery partners to support the small traders, a spokesperson of the Reliance Retail said in a statement.

The Reliance said it has a long track record of supporting small traders and we remain steadfast in our commitment of partnering with small merchants.

Earlier, the JCCI alleged that businessmen in Jammu are facing the “highest degree of discrimination” due to the “directionless policies” of the Union Territory government like ending age-old biannual Darbar move, new excise and the Geology and Mining Department policies, proposed move by big business houses like Reliance to open stores and restrictions on banquet halls, among other issues. kno