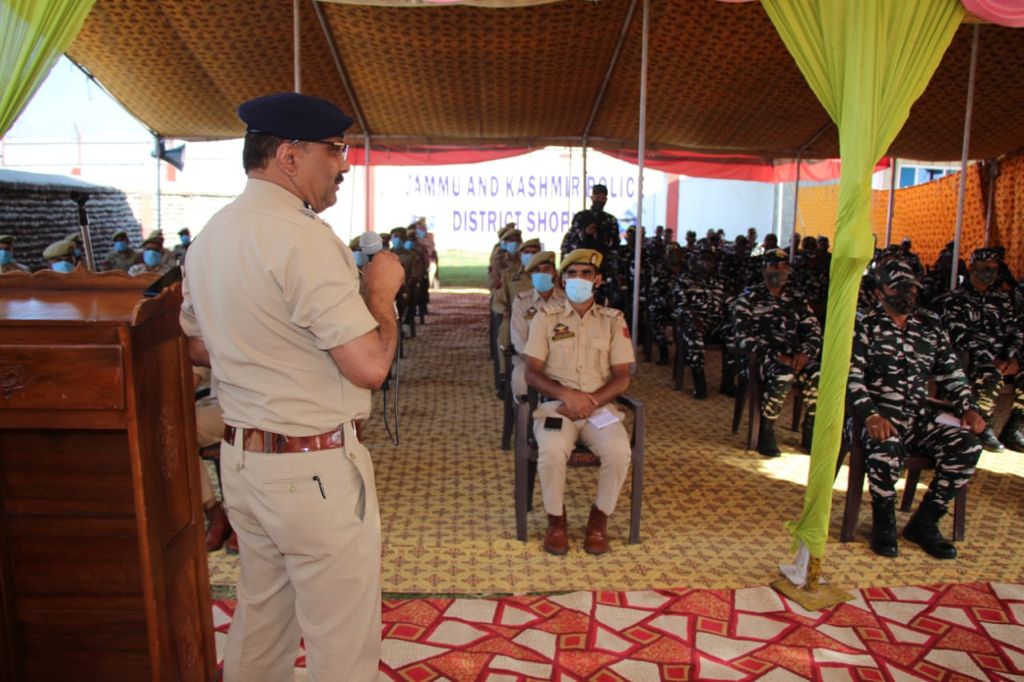 He also addressed the Darbar of policemen and officers besides inaugurated CCTV monitoring system, according to a statement.

While addressing the meeting, the DGP impressed upon the officers, to continue to put in best efforts not only to maintain peace and order in Jammu Kashmir but also to ensure that the dividends of a peaceful environment are further consolidated.
He said that Jammu and Kashmir Police alongwith the other security forces have contributed in a big way in building the current conducive security scenario and would not allow enemies of peace and people to disturb it.

“The DGP emphasized that the police must continue to deal strictly with elements involved in pushing the youth towards (militancy)”, the statement quoted him as saying.

He directed the officers to identify and book the persons involved in these activities. He said that forces should remain more vigilant “in view of increased infiltration bids by militants from across the IB/LOC so that nefarious designs of anti peace elements are foiled.”

“He said that many successful operations on the borders have not only thwarted infiltration bids considerably but also killed many infiltrating (militants). “
He called for intensified operations against the militants and also directed for stringent action against the elements involved in Narco trade, the statement reads.

The officers apprised the DGP J&K regarding the security measures put in place and operations underway.

The DGP while addressing the joint Darbar of Jawans and officers appreciated their joint and coordinated efforts in maintaining the peace and order. He said that because of their dedicated work that overall situation has improved drastically. He lauded the officers and jawans for dealing with difficult situations effectively and giving no chance to the anti-national and anti-social elements to cause any disturbance and inconvenience to people who already have seen a lot of bloodshed at the hands of Pak sponsored militants.

He said that Pak sponsored elements are trying hard to spread false and fabricated stories and propaganda by circulating some old videos and added that strong action will be taken against the elements involved in these activities.

Citing the examples of Manjakot, Thana Mandi and Nowshera encounters, the DGP said that elements across the border are continuously trying to foment trouble and disturb peace in the J&K by pushing militants here. He said that the peaceful atmosphere has been achieved after a lot of sacrifices and hard work and we would not allow anybody to disturb it.

The DGP later inaugurated a CCTV monitoring system at the Police Control Room, PCR Shopian. Inaugurating the system, the DGP directed the monitoring team to maintain vigil on the activities of anti-national, anti-social elements and trouble mongers and make full use of these facilities in fighting the crimes.